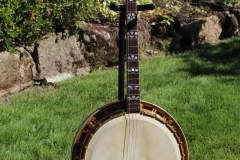 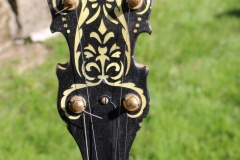 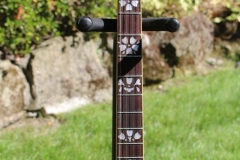 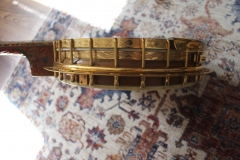 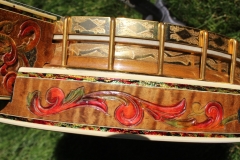 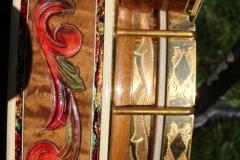 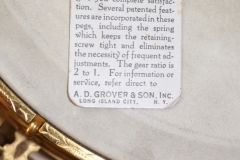 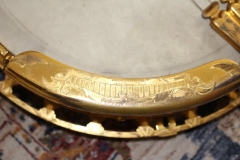 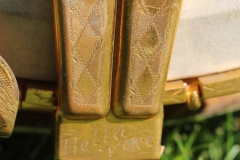 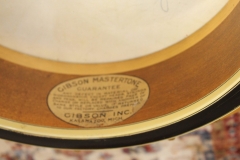 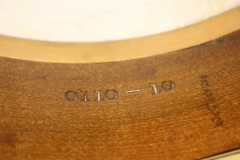 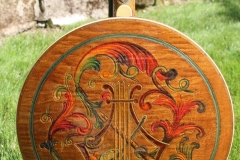 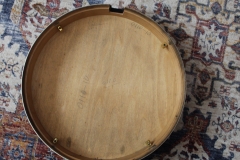 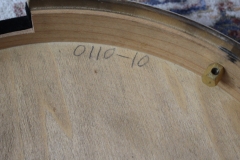 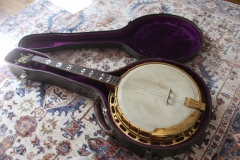 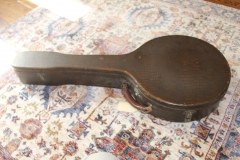 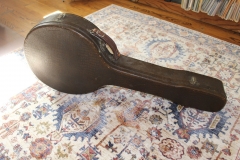 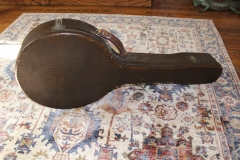 Bella Voce is Italian for “beautiful voice”; this model was introduced in 1927 and remained in the Gibson line for only three years.   Described in Gibson’s 1927 banjo catalog as “a royal member of the banjo family”, the Bella Voce was one of the most ornate banjos ever produced by the company and was available with a variety of woods and trim options; this example features curly maple with multicolored “Christmas tree” binding on the neck and resonator, and multi-play black and white binding on the bottom of the rim.  Although Gibson literature described the resonator and neck ornamentation of the Bella Voce as being hand-carved, in reality only the peghead and heel decorations were carved; the designs on the back and sides of the resonator were pressed.  The tone ring is the no-hole cast raised-head type most commonly associated with 1927 production; the Grover “two-hump” clamshell tailpiece is engraved “Bella Voce“, and the peghead overlay and rosewood fingerboard are inlaid with the most intricate inlay pattern of any catalogued Gibson banjo.  The gold-plated hardware features extensive engraving on the tension hoop, tone ring, flange, armrest, and tailpiece. A tag remaining with the banjo points out some features of the Grover tuning pegs.

Factory order numbers with leading zeroes are seen on prewar Gibson banjos only for a brief period in 1927-1928, concurrent with the introduction of the Bella Voce and Florentine models.  #0110-10 is accompanied by a card stating that the banjo was bought new in 1927 in a Boise, Idaho music store by John Flick. This fancy Mastertone banjo remains in excellent original condition including a period hard shell case.