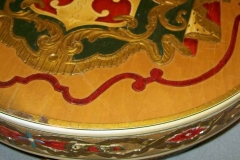 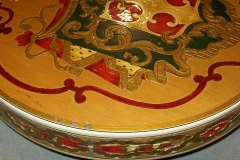 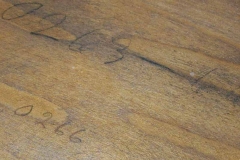 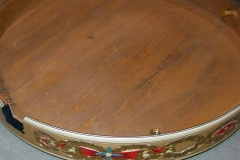 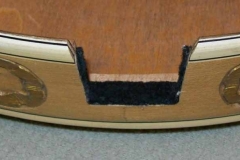 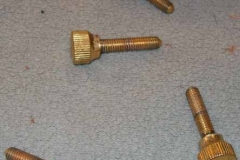 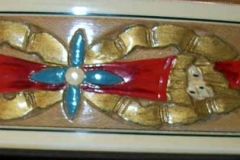 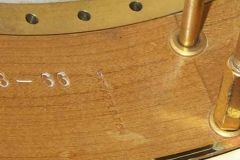 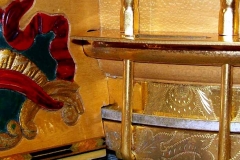 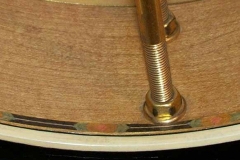 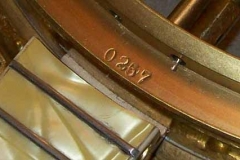 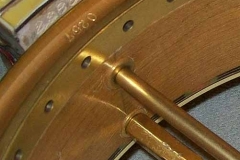 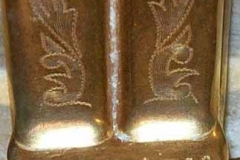 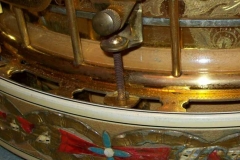 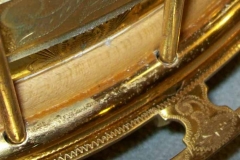 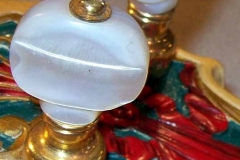 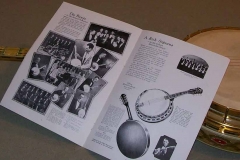 The Florentine was introduced in 1927 as the most expensive banjo in Gibson’s Mastertone line, a distinction it would retain until the introduction of the All American in 1930.

#0263-66 (see Gibson banjo serial numbers vs. factory order numbers) was produced in 1927 or 1928 in a series of banjos with lot numbers in an unusual “leading zero” format and completely separate from the other lot numbers of the period.  These leading-zero lot numbers came into use with the introduction of the Florentine and Bella Voce models, although other banjo models were also produced under such lot numbers.  Both the Florentine and Bella Voce were designated as “custom” banjos by Gibson with a variety of wood and trim options available.  While one of the wood options was referred to by Gibson as “white holly”, the majority of so-called white holly examples are actually built of white-painted maple.  This example is not painted, nor does it exhibit the high amount of figure usually seen in the curly maple sometimes used in Florentine and Bella Voce banjos.  Whether or not #0263-66 is in fact a true white holly example or was constructed of straight-grain maple is uncertain.

As is typical for the Florentine model, the resonator and neck feature fancy painted designs which Gibson described as “hand-carved” but which were, for the most part, pressed into the wood.  The “Gibson” logo on the pearloid-veneered peghead is spelled out in rhinestones; below the logo is a butterfly design in rhinestones, a rare variant of the standard “ice cream cone” motif.  The pearloid fingerboard is embellished with hand-painted scenes of Venice, despite the model’s being named after Florence, Italy.  All hardware is gold-plated and heavily engraved.  The flange is the tube-and-plate design and the tone ring is a raised-head type with forty holes; the tailpiece is a Grover “two-hump” clamshell, and the tuners feature genuine mother-of-pearl buttons.

The original owner of #0263-66 was A.L. Caroselli, a Detroit musician and magician who was born in Agnone, Italy on 8 September 1886.  Mr. Caroselli emigrated to the United States at the age of fourteen; the 21 January 1950 issue of The Billboard carried an article noting that “magicdom mourns the passing of the popular Detroit trixster and magic maker, Al Caroselli, who died at his home in Detroit January 8 of a heart attack.”  Caroselli’s obituary in the same issue described him as a “vaude performer, legit actor, and magician” who began his vaudeville career in 1913 as half of the team of Caroselli and Fitzpatrick.  The obituary goes on to say that Caroselli, whose father was a mural painter, also worked as a scene painter and in the 1920s played banjo in the Jean Goldkette and Danny Russo orchestras as well as fronting his own band at Webster Hall in Detroit.  His interest in magic led him to eventually invent and manufacture magic tricks as well as operating a magic store in Detroit; Mr. Caroselli was also a Gibson endorser and is seen above with this banjo in a photo which appeared in Gibson catalogs of the 1920s and 1930s.