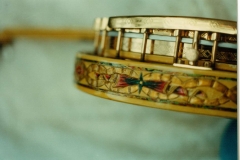 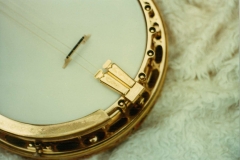 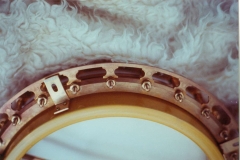 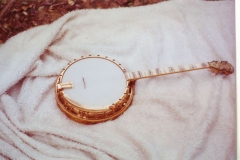 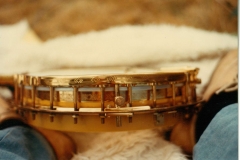 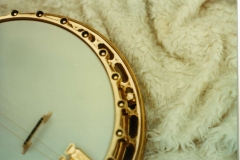 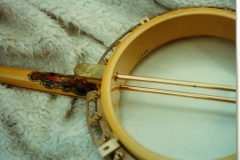 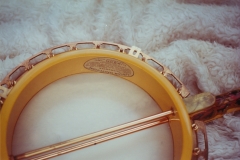 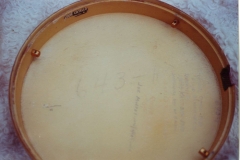 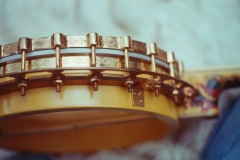 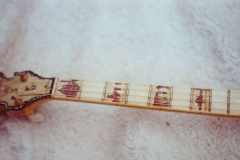 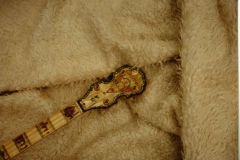 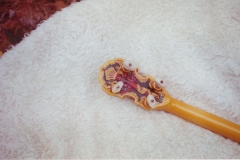 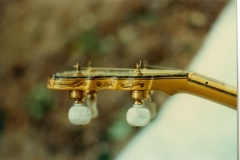 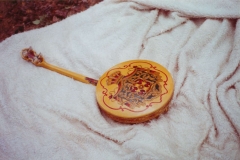 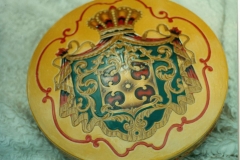 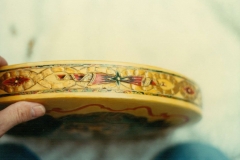 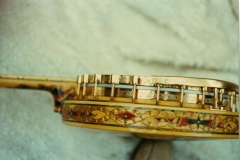 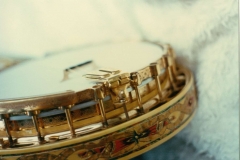 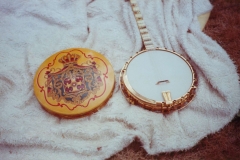 The Florentine, introduced in 1927, was one of Gibson’s fanciest jazz banjos and sold well until the onset of the Great Depression.  A small number of Florentines were produced as the 1930s went on, but the model was among the casualties in Gibson’s 1937 overhaul of its banjo line which included the introduction of the top-tension models, styles 7, 12, and 18.  In 1939, however, this possibly one-of-a-kind Florentine was made using the top-tension hardware and flathead tone ring of Gibson’s top-of-the-line style 18.

The neck and resonator of #643-1(see Gibson banjo serial numbers vs. factory order numbers) conform to standard specifications for the Florentine, with elaborate carving and painting on the back and sides of the resonator, the neck heel, and the back of the peghead.  The finish is what Gibson referred to as “white holly” but was in fact white-painted maple.  The peghead is inlaid with rhinestones spelling out the Gibson name and depicting a bouquet of flowers, typically referred to by collectors as the “ice cream cone”.  The pearloid fingerboard, as is typical for the Florentine, is paradoxically decorated with hand-painted scenes of Venice.

Writing on the inside of #643-1’s resonator lists Floyd Graham of Kansas City, Missouri as the banjo’s original owner (the initials “F.G.” are on the truss rod cover).  It was then inherited by Herb Kratoska in the 1950s (the last digit of the year is illegible) and bought by renowned four-string banjo builder and restorer C.C. Richelieu in 1964.  The last owner listed is Joe Murphy in the 1970s.