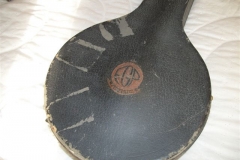 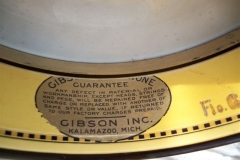 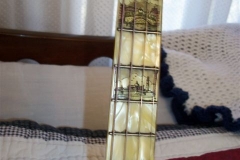 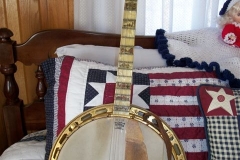 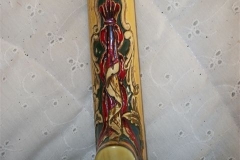 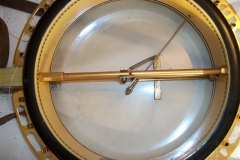 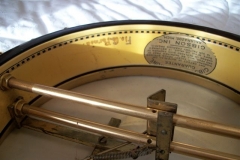 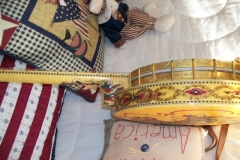 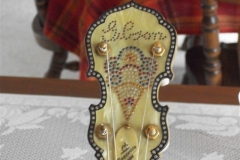 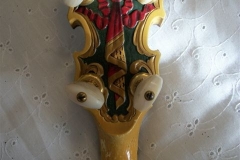 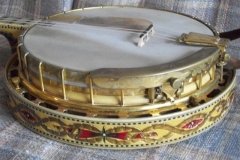 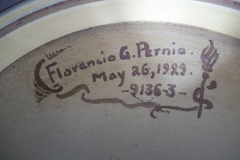 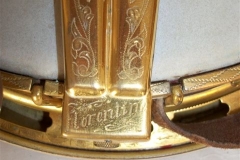 The Florentine was introduced in 1927 and was one of the most ornate banjos ever produced by Gibson.

The Florentine featured a pearloid peghead overlay inlaid with rhinestones in what was meant to be a bouquet of flowers but is commonly referred to by collectors as an “ice cream cone”; the fingerboard was also pearloid and was decorated with hand-painted scenes not of Florence, as one would expect, but Venice.  The neck heel, peghead back, and resonator were elaborately painted and featured what Gibson literature described as “carving” but which was actually, in the case of the resonator back and sidewalls, a pressed design.  All hardware was gold-plated and heavily engraved.

The Florentine was available in the “white holly” seen here (actually painted maple), burl walnut, curly maple, or rosewood.  Customers could select from a variety of binding options and the type seen on this example is the “checkerboard” binding also used on Gibson’s style 6 Mastertone.  The tailpiece seen here is a Grover two-hump clamshell.  This example was also equipped at the factory with Gibson’s “Vibrato Tone-Master” armrest-activated mute, which Gibson promised would provide the player “tonal control like an organ.”  The tuners are the original “two-band” Grovers with solid mother-of-pearl buttons.

#9136-3 dates to 1928 (see Gibson banjo serial numbers vs. factory order numbers) and, typical of most Florentines, features a two-piece flange.  The tone ring, rather than the forty-hole raised-head design normally seen on tenor-necked Florentines, is a no-hole flathead of undetermined weight and profile.  The rim has been modified by the removal of wood from the inside top edge to leave a clearance for the inner lip of the tone ring.

The original owner of #9136-3 was Florencio G. Pernia (October 27, 1901-November 22, 1992), who wrote his name and date of purchase (May 26, 1929) inside the resonator.  Mr. Pernia’s name also appears inside the rim and on the factory-engraved truss-rod cover; the original case is decorated with his initials.