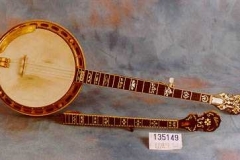 The Florentine was introduced in 1927 and was one of the most ornate banjos ever produced by Gibson.  Like the Bella Voce, the Florentine was offered in a variety of finishes; this example is finished in what Gibson called “white holly” but was actually white painted maple.

Higher-end banjos tended to be slow movers; in some cases, the components for these banjos sat in the factory for many years before finally being assembled and shipped out, sometimes in configurations not corresponding to any standard catalog model.  Gibson ledgers record the shipment on June 19, 1941 of a “TB-F bargain” with factory order number #9137-1 to Clayton Decker in a #509 case.  The banjo was listed as being equipped with a #401-G head guard, which is no longer present.

This banjo is elaborately carved and painted on the resonator and tenor neck, and the hardware is gold plated and heavily engraved.  There is checkerboard binding on the bottom edge of the rim as well as on both edges of the resonator.  The flange is two-piece and the tone ring is a high-profile full-weight 1930s Granada twenty-hole flathead ring with an uncut Mastertone decal.  The tailpiece is engraved “Bella Voce” and the bracket nuts are nickel plated, further indications of Gibson’s legendary eccentricity in its prewar banjos.

Although the catalog specifications for the Florentine included a pearloid fingerboard decorated with hand-painted Venetian scenes and a pearloid peghead overlay ornamented with rhinestones, the tenor neck of this banjo incorporates a fingerboard of the type typically seen on style 6 banjos with an ebony fingerboard, checkerboard binding and modified hearts and flowers inlays.  The fiddle-shaped peghead  inlaid with the hearts and flowers pattern is the type seen on Granada and style 4 banjos of the 1920s.