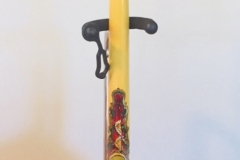 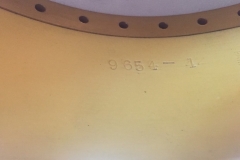 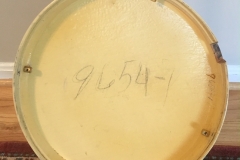 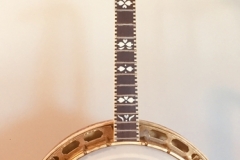 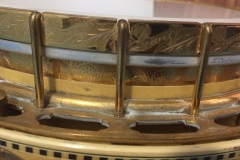 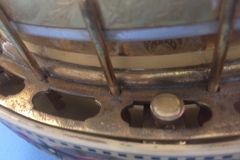 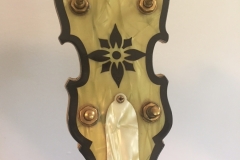 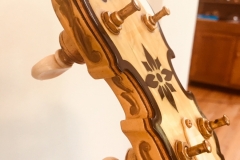 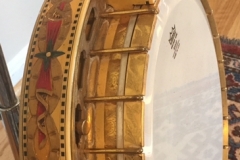 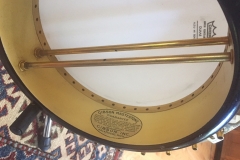 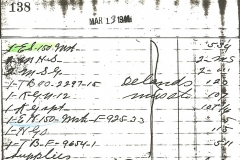 The Florentine was introduced in 1927 and was one of the most ornate banjos ever produced by Gibson.  Its standard specifications included a pearloid peghead overlay inlaid with rhinestones in what was meant to be a bouquet of flowers but is commonly referred to by collectors as an “ice cream cone”; the fingerboard was also pearloid and was decorated with hand-painted scenes not of Florence, as one would expect, but Venice.  The neck heel, peghead back, and resonator were elaborately painted and featured what Gibson literature described as “carving” but which was actually, in the case of the resonator back and sidewalls, a pressed design.  All hardware was gold-plated and heavily engraved.

#9654-1 differs from the typical Florentine in a few significant ways.  Rather than a pearloid fingerboard with scenes of Venice, this banjo features an ebony fingerboard with hearts and flowers inlays and checkerboard binding as seen on style 6 Mastertones; the peghead overlay is pearloid but in lieu of the Florentine‘s typical rhinestone embellishments, the Gibson logo, a border, and a floral motif (reminiscent of the resonator decoration on Gibson’s non-Mastertone style 11) are all silkscreened in black.  Another significant departure from typical Florentine specifications is the one-piece flange, seen on only a handful of Florentines.

Though this banjo’s factory order number dates to 1930, Gibson’s factory ledgers indicate that it did not leave the factory until March 13, 1941, when it was shipped to Deland’s Music Store (location unknown).  Gibson’s surviving ledgers, which date back to March 1935, record only one other banjo from this lot; TB-All American “Special” Mastertone #9654-7 was shipped in 1940 and combines features of the All American, the Florentine, and other high-end Gibson banjo models.

#9654-1 remains in excellent original condition with the exception of a missing tailpiece and armrest and one broken section of the one-piece flange; considering the late date of this banjo’s shipment, it may have left the factory without an armrest.  The Mastertone decal is positioned on the opposite side of the rim from its normal location.