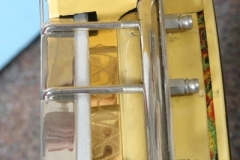 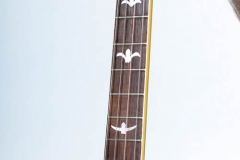 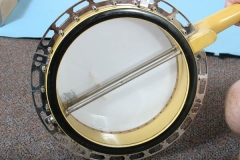 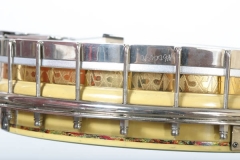 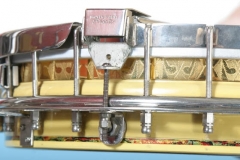 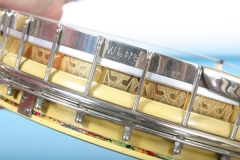 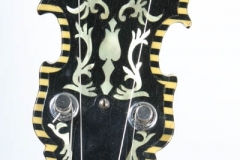 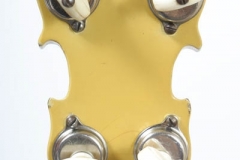 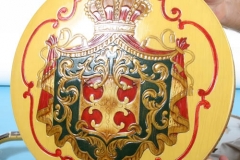 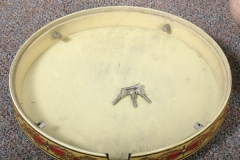 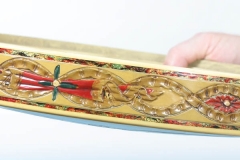 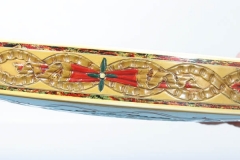 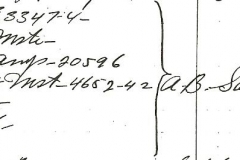 Introduced in 1927, the Florentine was described in one prewar Gibson catalog as a “patrician leader among fine banjos.”  Gold-plated, engraved hardware and a carved and painted neck and resonator combined with a rhinestone-studded peghead and pearloid fingerboard depicting scenes of (oddly) Venice to create one of the most opulent banjo offerings of the Jazz Age.

The onset of the Great Depression and changing musical tastes killed the market for ultra-fancy banjos, and surplus Florentine parts remained at the factory as the 1930s wore on.  In the late 1930s and early 1940s some of these components were used on “floor-sweep” banjos as Gibson assembled banjo from parts remaining in stock with little regard to catalog specifications.  The Florentine had been discontinued from Gibson’s product line for five years when #E3347-4 was shipped as a “TB-F” on January 22, 1942 to Arthur B. Sauer, a Gibson dealer in Lorain, Ohio.

This example’s resonator conforms to standard specifications for the Florentine in the wood option known as “white holly”, which was actually white-painted maple.  The fancy painted designs were specified as “hand-carved” in Gibson literature but were actually pressed into the wood.  The resonator binding is the type known to collectors as “Christmas tree” binding; this binding is also found on the bottom edge of the rim.

The forty-hole, raised-head tone ring is gold-plated and engraved in the pattern used on the All American, introduced in 1930 as the most ornate and expensive banjo produced by Gibson before World War II.  The remainder of the hardware is nickel-plated and devoid of engraving; the tailpiece is a simple Grover Presto rather than the Grover DeLuxe “clamshell” normally found on the company’s higher-end banjos.  The neck, while painted in the “white holly” finish, lacks any of the carving or painting at the peghead and heel normally seen on Florentine models and has only plain white binding.  The lack of a handstop is a common feature of necks from the wartime period.  The fingerboard, rather than the Florentine‘s trademark pearloid embellished with hand-painted scenes of Venice, is rosewood inlaid with the fleur-de-lis pattern used earlier on the non-Mastertone style 1.  Style 1 had changed from the fleur-de-lis pattern to simple dots in the late 1930s, and surplus fleur-de-lis-inlaid fingerboards have been seen on a number of late “floor-sweep” banjos.  In contrast to the relatively plain fingerboard, the peghead overlay is the type used on the style 6 Mastertone, with checkerboard binding and elaborate mother-of-pearl inlay.  The tuners are simple nickel-plated “pancakes”.

The factory order number is stamped on the back of the peghead; another factory order number, illegible due to layers of paint and lacquer, is stamped inside the rim.  There is no Mastertone decal inside the rim.  The presence of Phillips-head screws in the resonator L-brackets and short nuts on the head-tension hooks are further characteristics typical of late prewar and wartime banjo production.  #E3347-4 remains in its original #511 case by Geib.

Photos by Calvin Minner; Courtesy of an anonymous owner.