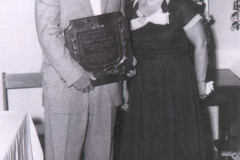 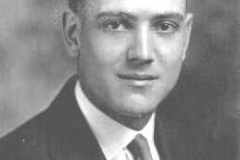 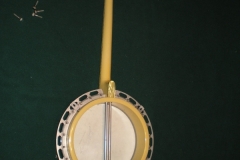 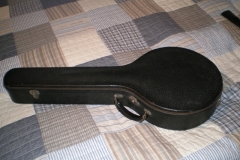 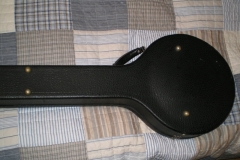 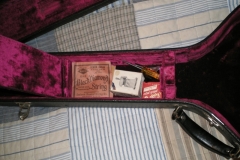 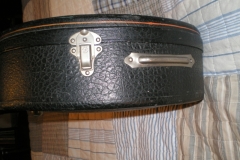 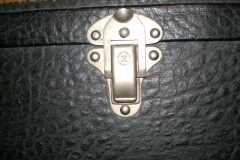 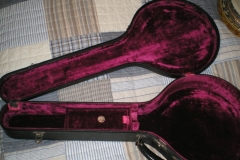 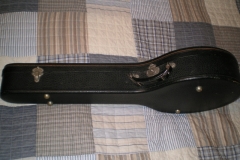 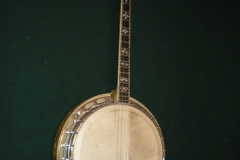 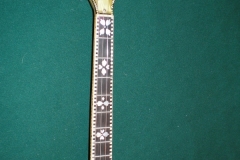 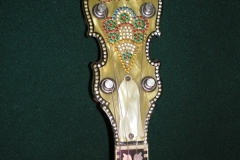 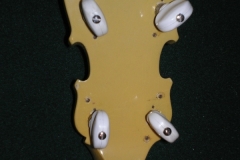 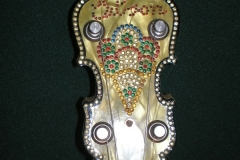 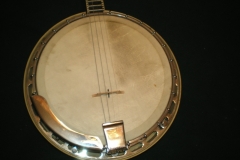 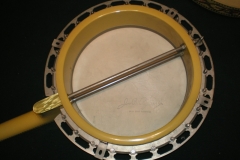 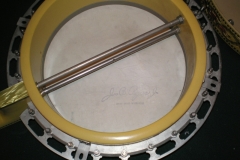 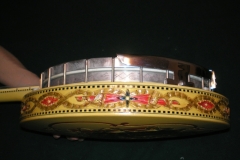 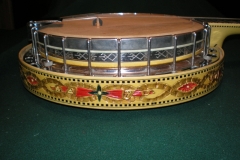 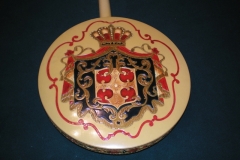 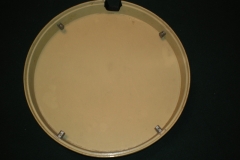 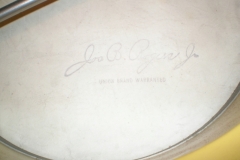 This banjo has the fancy carved and painted resonator as well as the pearloid and rhinestone peghead overlay of Gibson’s Florentine model banjo, which was introduced in 1927 and was one of the most ornate banjos ever produced by the Gibson company.  The Florentine model had actually been discontinued in 1937 but this example was apparently made circa the early 1940s to satisfy an order using Florentine components that were still in stock.  While a standard Florentine would have had gold-plated and engraved hardware, this banjo has nickel-plated hardware with engraving only on the outer skirt of the tone ring, and this engraving pattern is different from the one normally seen on the Florentine.  Other features that differ from the catalogue description for the Florentine model are the lack of carving and painting on the neck, and the ebony fingerboard with checkerboard binding and mother-of-pearl inlays in the “hearts and flowers” pattern (Florentines typically featured pearloid fingerboards hand-painted with scenes of Venice).

This banjo’s one-piece cast metal flange is highly unusual for a Florentine model but is consistent with a manufacture date of circa 1942, as are the single-piece armrest, simple tailpiece, small bracket nuts, and the use of Phillips-head rather than slot-head screws.  The banjo’s tone ring is a no-hole archtop type, normally seen only on Gibson banjos manufactured circa 1927.  There is no Gibson Mastertone label, factory order number, or serial number on this banjo, which is not uncommon for very late production prior to Gibson’s suspension of banjo construction during World War II.  The unusual mixture of components is also typical of the era and such banjos are often referred to as “floor-sweep” instruments since it is believed that as banjo production slowed and as production of metal components was discontinued for the war effort, employees would search the factory for any parts available to fill the few orders that came in.

This banjo is in excellent original condition with only the tuners having been replaced, and is accompanied by its original plush-lined hard case by the Geib company.

The original owner of this possibly one-of-a-kind Florentine was Dr. Howard Fugate, who was born March 18, 1899 and died August 30, 1986.  Dr. Fugate’s grandson tell us, “He was a physician, in the small town of Sykesville, Pennsylvania. . . the old country doctor you read about in stories.  For years, he only charged a dollar a visit, and often took produce and eggs and anything else farmers would give him for payment. His office was attached to his house, and he would see patients until there were no more to be seen, often working late into the night.  He would take short breaks for meals, and also to play his banjo. . . it helped relax him. When he was done for the day, he would sit in front of the fireplace and play for hours.  He was self–taught, but became a very good player, according to my parents.  He was indeed beloved by the community. . . they named a street in town after him—Dr. Fugate Drive—and to this day I have people come up to me and talk about him and tell stories about him.”  Dr. Fugate is believed to have bought this banjo new from a music store in DuBois, Pennsylvania.

Photos courtesy of the family of Dr. Howard Fugate.