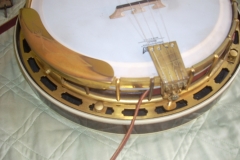 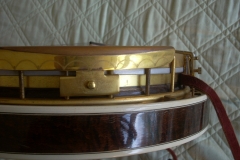 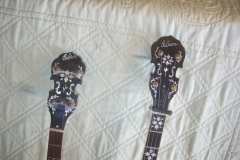 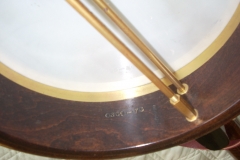 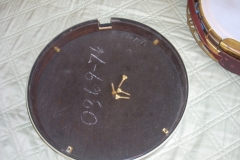 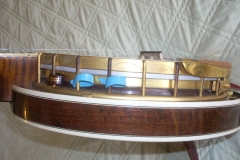 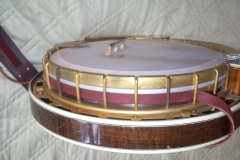 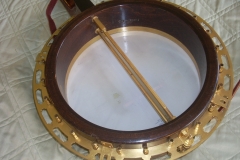 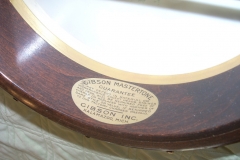 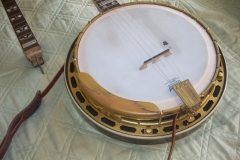 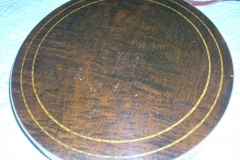 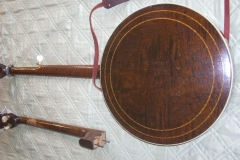 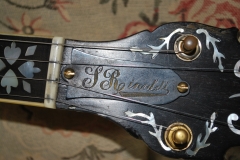 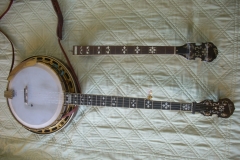 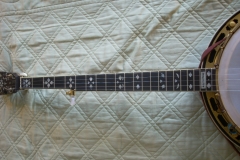 Gibson described its new Granada model in 1925 as “a distinguished Gibson model of beautiful flamed curly maple with triple gold-plated metal parts, satin finish, hand burnished.  It has a slender, hand-shaped neck built with the Gibson patented truss-rod which prevents warping; 21 or 23-inch scale as requested.  11-inch rim.  The fingerboard is of Brazilian rosewood, bound with white and black ivoroid and marquetry stripings and inlaid with original designs of white pearl to match the peg head design.  It has laminated and arched flange resonator with marquetry inlays and bound with white and black ivoroid, and is equipped with gold plated (4 to 1) geared pegs, Kershner tailpiece and Gibson adjustable arm-rest; best quality Rogers white calf-skin head, pearl nut, maple bridge with ebony saddle and specially gauged strings.”

#0369-76 (see Gibson banjo serial numbers vs. factory order numbers) dates to the 1927-1928 period in which Gibson produced some banjos under a sequence of factory order numbers with leading zeroes and also equipped a number of Mastertone banjos with the no-hole version of the raised-head tone ring as seen here.  This banjo was located in the attic of a house in Connecticut; the original truss-rod cover is personalized with the name “L. Rinaldi” and the five-string neck was made by Jim DeCava and Winston Bish of the Liberty Banjo Company in Bridgeport, Connecticut in the early 1970s.