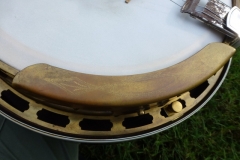 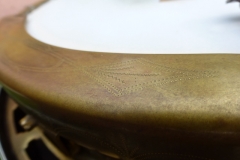 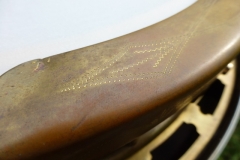 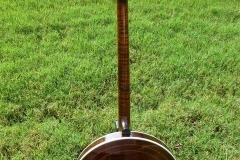 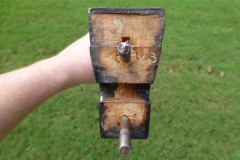 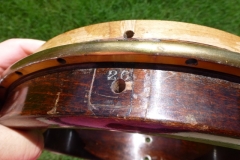 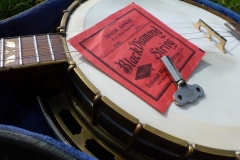 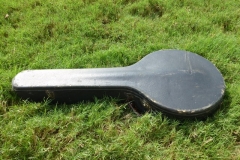 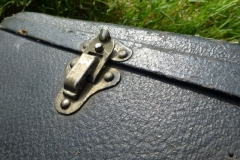 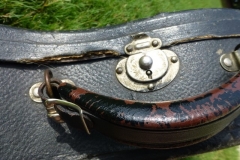 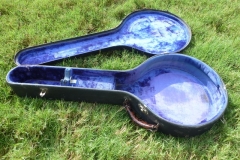 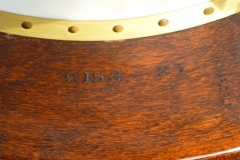 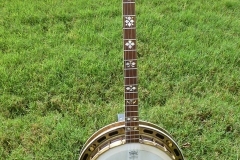 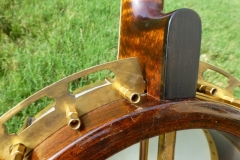 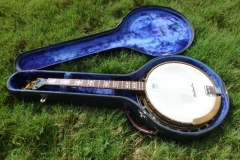 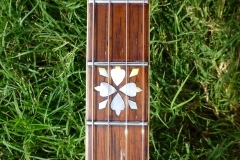 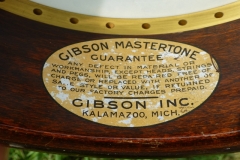 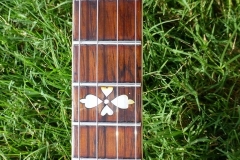 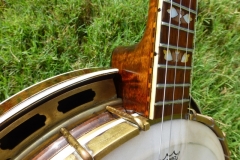 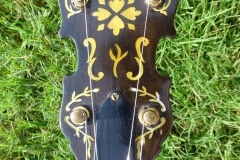 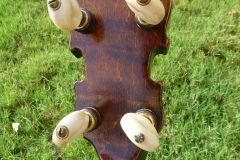 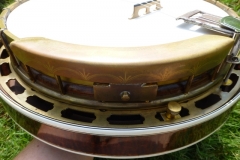 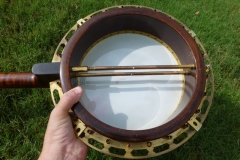 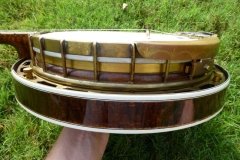 Gibson described its new Granada model in 1925 as “a distinguished Gibson model of beautiful flamed curly maple with triple gold-plated metal parts, satin finish, hand burnished.  It has a slender, hand-shaped neck built with the Gibson patented truss-rod which prevents warping; 21 or 23-inch scale as requested.  11-inch rim.  The fingerboard is of Brazilian rosewood, bound with white and black ivoroid and marquetry stripings and inlaid with original designs of white pearl to match the peg head design.  It has laminated and arched flange resonator with marquetry inlays and bound with white and black ivoroid, and is equipped with gold plated (4 to 1) geared pegs, Kershner tailpiece and Gibson adjustable arm-rest; best quality Rogers white calf-skin head, pearl nut, maple bridge with ebony saddle and specially gauged strings.”

#9152-26 (see Gibson banjo serial numbers vs. factory order numbers) dates to 1928 and for the most part conforms to standard specifications for the model at the time, including a forty-hole archtop tone ring.  The original tailpiece has been replaced with a nickel-plated Grover “window” or “first model” tailpiece as used on some of Gibson’s less-expensive banjo models.  This example remains in original condition otherwise with the exception of one new replacement nickel-plated resonator thumbscrew and one prewar replacement head-tensioning bracket.  A coat of lacquer was applied to the fingerboard by a previous owner and has been partially removed.  The fingerboard is unusual in that it lacks a Mastertone block and the hearts and flowers inlay pattern is not the version normally seen on the Granada of this period, but rather a variation which was used on some banjos made by Gibson for Montgomery Ward under the Studio King brand name in 1930.  The spacing of the inlays is also unusual in that some of the mother-of-pearl pieces are partially covered by the frets; overall, the presence of this fingerboard on #9152-26 is something of a mystery.

#9152-26 was previously owned by Herbert Reese, who was born in Baltimore, Maryland in 1913.  Mr. Reese taught himself to play tenor banjo and tenor guitar as a teenager, and in the 1930s was a member of the Tommy Dorsey Orchestra.  After World War II, Mr. Reese moved to Bartlesville, Oklahoma where he is believed to have bought this banjo in the mid-1950s.   Mr. Reese played banjo and electric bass with other Bartlesville musicians under the name “The Reminiscers” until his death in 1992.