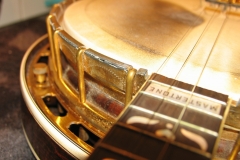 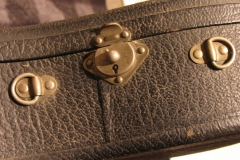 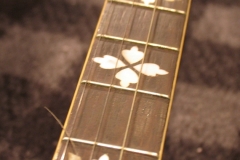 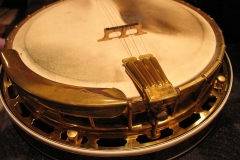 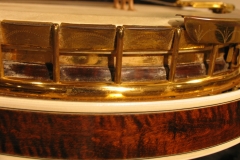 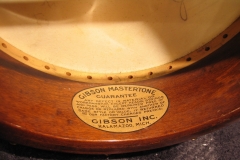 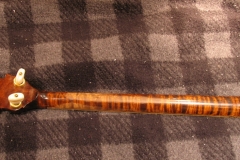 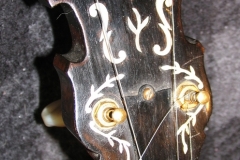 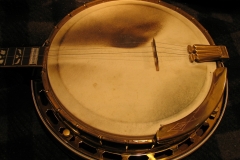 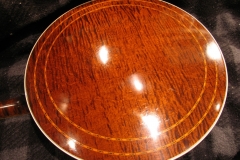 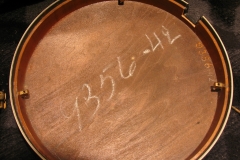 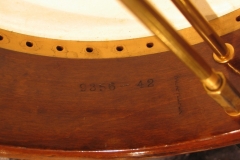 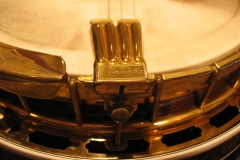 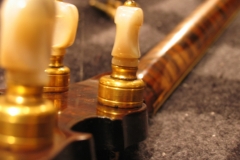 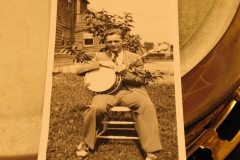 #9356-42 (see Gibson banjo serial numbers vs. factory order numbers) is from the last known lot of Granadas made in the earlier 1920s style before the change from the two-piece flange to the one-piece flange in 1929.  The fiddle-shaped peghead with hearts and flowers inlays had been standard on the Granada since the model’s introduction in 1925; the forty-hole archtop tone ring replaced the earlier ball-bearing ring circa 1927, with a brief transitional period in which no-hole archtop rings were used.  The wood is curly maple with a uniform dark stain, two concentric circles of wood purfling on the back of the resonator, and matching purfling underneath the fingerboard binding.  Typical of the Granada, all hardware is gold-plated with engraving on the tension hoop, armrest, and clamshell tailpiece.  The tuners are two-band Grovers with mother-of-pearl buttons.  This banjo is in excellent original condition with the exception of the tension hoop, which is made of pot metal and shows the deterioration and disintegration often seen in pot metal hoop; gold-plated pot metal tension hoops seem particularly susceptible to this type of failure.  The banjo remains in its original hard shell case.

This banjo’s original owner was William Woodrow, who played in hotels around Cleveland, Ohio in the 1930s and 1940s before serving in the Navy.  Mr. Woodrow primarily performed on guitar with a female singer, and also taught guitar and banjo.  He passed away in 2007 at the age of 94.