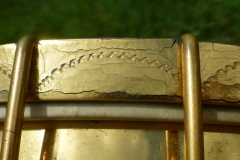 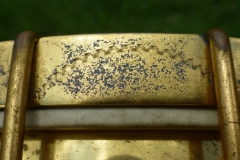 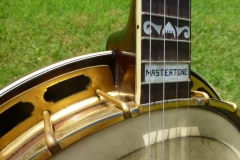 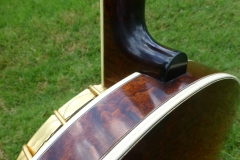 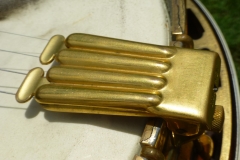 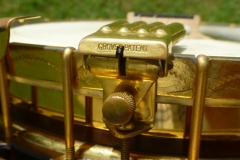 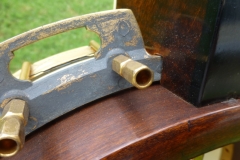 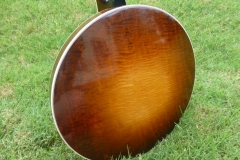 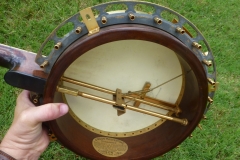 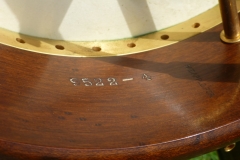 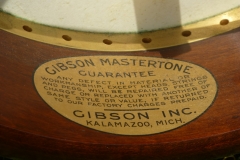 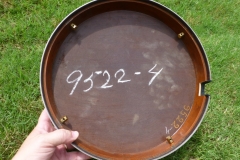 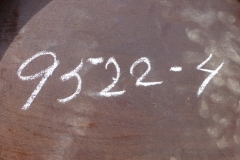 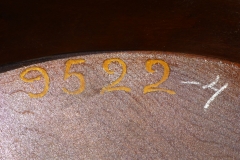 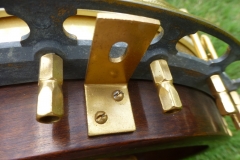 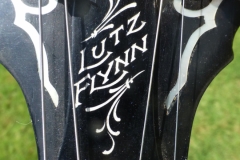 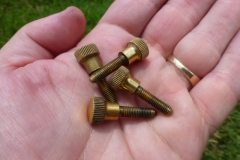 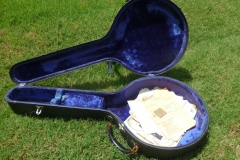 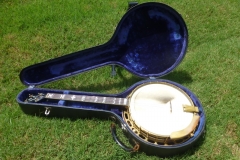 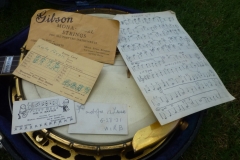 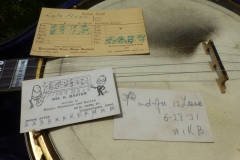 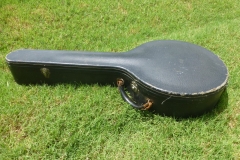 The Granada was not that fancy by the standards of the jazz banjo era (see the Bella Voce, Florentine, and All American), but it was definitely a deluxe instrument with its highly-figured curly maple and its gold-plated and engraved hardware.  #9522-4 (see Gibson banjo serial numbers vs. factory order numbers) dates to the first part of 1930 and is one of the earlier Granadas made in the new 1930s configuration featuring a one-piece flange, double-cut peghead, flying eagle inlays, and sunburst-finished curly maple resonator.  The earliest cast metal flanges and stretcher bands produced for Gibson by the Doehler Die Casting Company were plagued by a type of intergranular corrosion known as “zinc pest“; the stretcher band of #9522-4 has unfortunately been affected by zinc pest and shows extensive warping and cracking.  The banjo otherwise remains in excellent original condition, including its first-generation flange and corresponding “fat” rim measuring .640″ thick at the bottom rather than the the .625″ dimension seen in banjos with the later, more heavily-built flange.

The original owner of this banjo was Joseph Lutz Flynn (July 3, 1917–April 3, 2014); Mr. Flynn was born in Bridgeville, Pennsylvania and grew up in Youngstown, Ohio where he took banjo lessons as a teenager from William K. Baxter at the Youngtown Tenor Banjo Institute.  After graduating from Amherst College and the Harvard Business School, Mr. Flynn had a distinguished career in both military and civil aviation.  #9522-4 bears the factory personalization “Lutz Flynn” on its truss-rod cover.