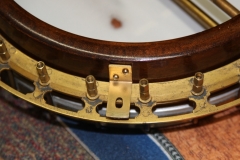 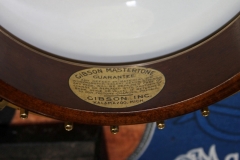 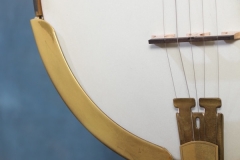 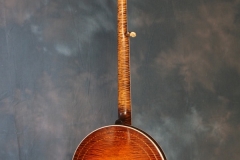 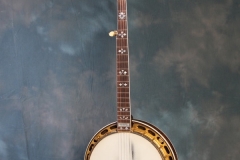 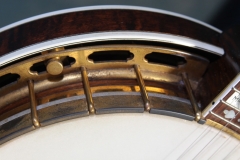 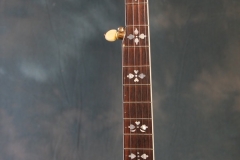 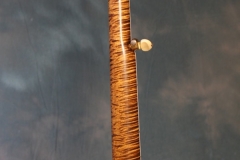 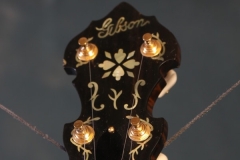 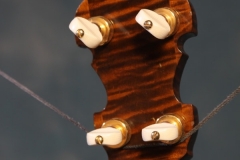 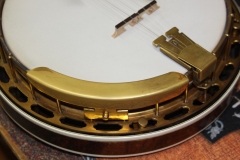 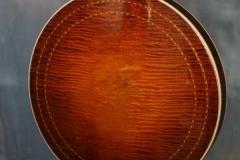 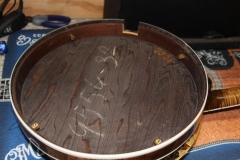 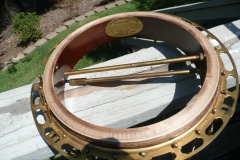 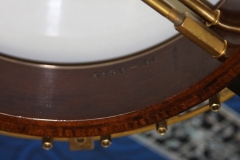 #9556-32 (see Gibson banjo serial numbers vs. factory order numbers) dates to 1930 and began life as a tenor-necked instrument with a forty-hole archtop tone ring.  It was later fitted by luthier Snuffy Smith with a prewar flathead tone ring and a neck by Frank Neat.  The concentric rings of marquetry on the back of the resonator are a feature typically associated with the two-piece-flange Granadas of the 1920s, but they are found on some of the earlier one-piece-flange examples from the 1930s; both types of resonator have been seen in lot #9556.  This example features a first-generation one-piece flange with a slightly larger inner diameter than the later flanges, resulting in a rim thickness of slightly over 5/8″ below the flange.  These “fat rims” are more commonly seen on slightly earlier banjos with lot numbers in the 9400s.  The flange and tension hoop of #9556-32 remain in excellent original condition; these parts are often deteriorated on 1930s Granadas due to interaction of the gold plating with the pot metal components.