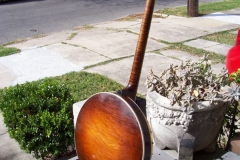 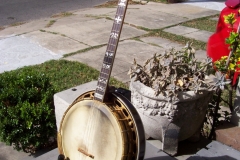 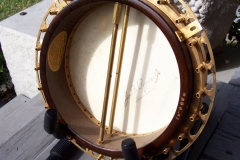 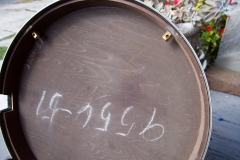 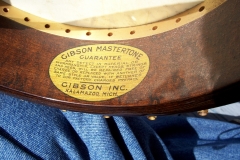 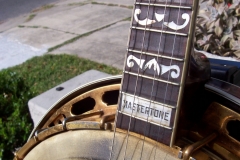 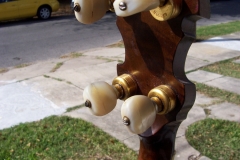 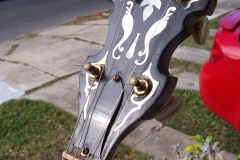 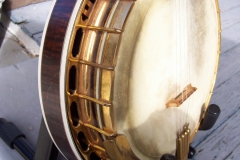 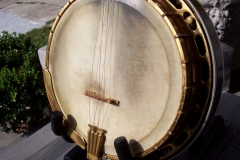 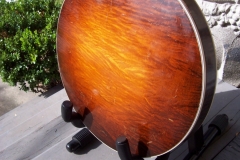 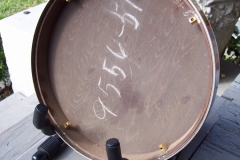 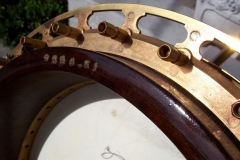 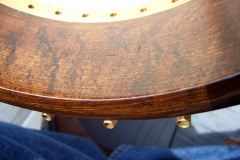 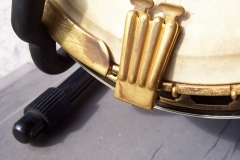 This beautiful 1930 TB-Granada was owned for many years by Judge Tom Davis of Carson City, Nevada, and is still in his family.  It remains in excellent original condition with curly maple neck and resonator, gold-plated and engraved hardware, Grover clamshell tailpiece, forty-hole archtop tone ring, one-piece flange, double-cut peghead and rosewood fingerboard with flying eagle inlays.  The banjo is still set up with a calfskin head.  “J.L. Fay”, most likely the name of an earlier owner, is written above the chalk factory order number inside the resonator.

Judge Davis’s son relates, “There is an old story my dad used to tell about the Kingston Trio, and how when he was a poor student at the University of Nevada Reno in the 50’s, he would head down to the casinos on the main drag, and play his banjo for beer money. Apparently the Trio were performing at one of the casinos and they heard a story about a kid playing a banjo down on the street who was pretty good, and they went to see for themselves. After seeing/hearing him on the sidewalk, they invited him back to play a number with them onstage. My dad’s nickname is ‘Tom Dooley‘ and wouldn’t you know, that was the song he played with them (or so the story goes)…I guess that could be where he picked up the nickname in the first place. It also happens to be one of the few tunes I can almost play, without offending too many ears.”

Photos courtesy of the family of Judge Tom Davis.