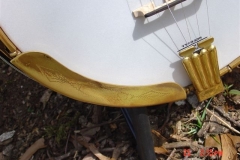 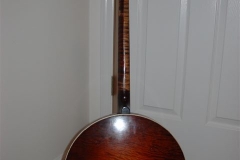 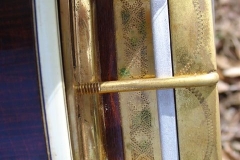 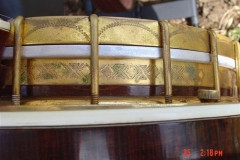 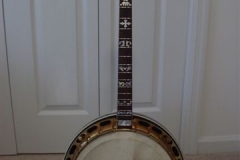 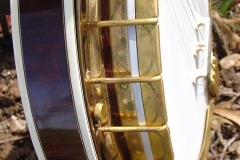 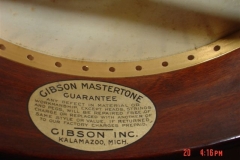 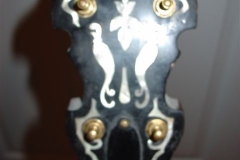 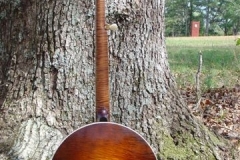 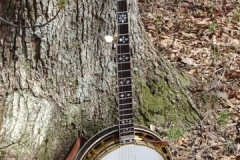 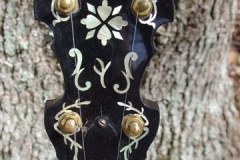 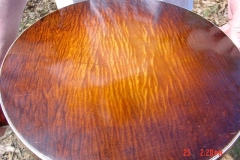 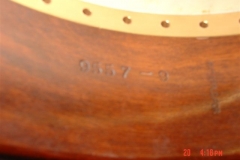 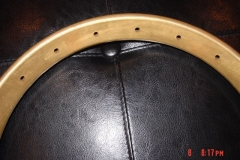 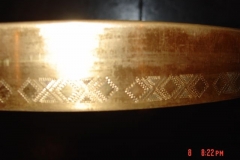 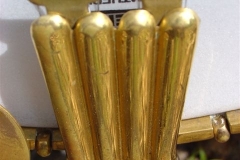 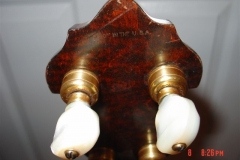 Banjo makers in the 1920s and 1930s vied with one another to design ever more ornate and, in the eyes of some, ever gaudier banjos.  Gold plating, engraving, carving, painting, and rhinestones adorned the top-of-the-line offerings from Gibson and its competitors; the Granada, as the lowest-priced gold-plated and engraved Gibson banjo (or “the bottom of the top of the line”) struck what many consider the optimum balance between opulence and restraint.  Introduced in 1925 with the debut of Gibson’s Mastertone line, by the 1930 date of this example the Granada featured highly figured curly maple with a sunburst finish, flying eagle (or, rarely, hearts and flowers) inlays with a double-cut peghead, a one-piece flange, and modest engraving on the armrest and tension hoop.  The standard tailpiece was a Grover “clamshell”, often engraved “Granada” as on this example.

#9557-9 (see Gibson banjo serial numbers vs. factory order numbers) originally featured a non-engraved, forty-hole archtop tone ring as was standard for the model.  The banjo has since been converted to flathead with the addition of an original prewar style 18 flathead tone ring with the typical style 18 engraving on the outer skirt.  The five-string conversion neck with hearts and flowers inlays is by Frank Neat.