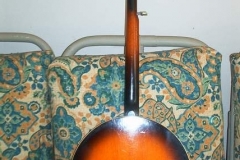 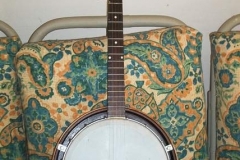 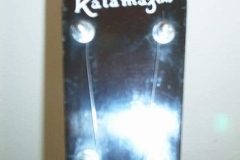 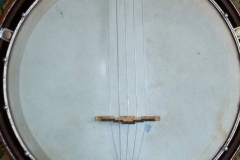 When the Gibson company’s survival was threatened in the early 1930s with the onset of the Great Depression, it turned to the production of wooden toys to stay alive until the musical instrument market began to recuperate.  One of the toy lines was given the name of the Gibson company’s home town in Michigan–Kalamazoo.   A couple of years later, this brand name was revived and applied to a line of low-priced instruments produced by Gibson beginning in 1932.

The banjo pictured here is an original five-string Kalamazoo.  The pot is the “hook and shoe” type with sixteen brackets and no flange.  There is no tone ring, but only a bead turned in the top of the rim, which measures 1/2″ at the bottom.  This type of head bearing was also used in the least expensive Gibson-brand banjo, style 00.  The sunburst finish on this banjo is also quite similar to the one found on style 00, although in the case of the Kalamazoo banjo the resonator back is flat rather than arched.  The maple resonator is single-bound on the back edge only.  The tailpiece has been replaced.