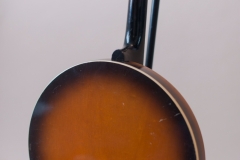 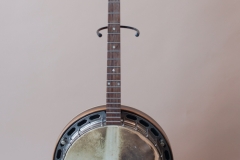 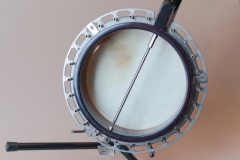 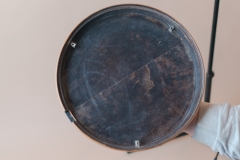 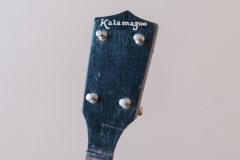 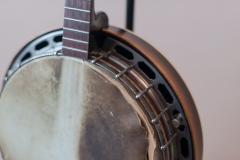 When the Gibson company’s survival was threatened in the early 1930s with the onset of the Great Depression, it turned to the production of wooden toys to stay alive until the musical instrument market began to recuperate.  One of the toy lines was given the name of the Gibson company’s home town in Michigan–Kalamazoo.   This same brand name was applied to a line of low-priced instruments produced by Gibson from 1936 to 1940.

The banjo pictured here is a Kalamazoo tenor.  There is no tone ring.  The flat bracket hooks and thin tension hoop are similar to those used on Gibson’s style 00 banjos; the sunburst finish is also quite similar to the one seen on style 00, although in the case of the Kalamazoo banjo the resonator back is constructed of two flat pieces of solid maple rather than being arched and consisting of poplar plies with a maple veneer.  The resonator is single-bound on the back edge only and the three-ply maple rim measure 5/8″ below the flange.  The presence of a one-piece flange is highly unusual for this model, which typically featured “bracket-shoe” construction with no flange, only sixteen brackets, and simply three l-brackets for the resonator attachment.