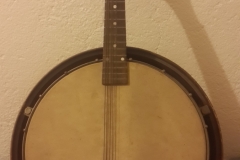 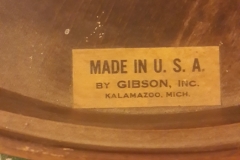 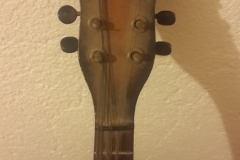 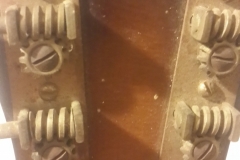 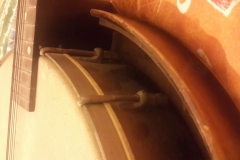 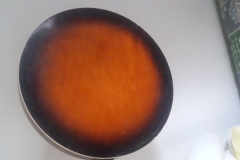 When the Gibson company’s survival was threatened in the early 1930s with the onset of the Great Depression, it turned to the production of wooden toys to stay alive until the musical instrument market began to recuperate.  One of the toy lines was given the name of the Gibson company’s home town in Michigan–Kalamazoo.   A couple of years later, this brand name was applied to a line of low-priced instruments produced by Gibson beginning in 1933.

The banjo pictured here is a Kalamazoo mandolin-banjo.  In keeping with standard Kalamazoo specifications, the pot is the “hook and shoe” type with sixteen brackets and no flange; there is no tone ring and the flat bracket hooks and thin tension hoop are similiar to those used on Gibson’s style 00 banjos.    The sunburst finish is also quite similar to the one seen on style 00, although in the case of the Kalamazoo banjo the resonator back is flat rather than arched.  The maple resonator is single-bound on the back edge only.

This instrument surfaced in South Africa in October 2014; it bears the “Made in U.S.A.” resonator label and “Made in the U.S.A.” neck stamp typical of Gibson instruments shipped outside the United States.  The original retailer of this mandolin-banjo would almost certainly have been H. Polliack and Co., Ltd., Gibson’s leading prewar dealer in South Africa.  As is typical for Kalamazoo-brand mandolin-banjos, this instrument is not marked with a factory order number or serial number; existing Gibson shipping records show only six Kalamazoo mandolin-banjos shipped to Polliack from 1935 to 1937.

The current owner tells us that his father, D.J.C. Mostert, was the instrument’s second owner.  He relates that Mr. Mostert played Boeremusiek with a group of friends in the 1950s and bought the mandolin-banjo from one of his fellow musicians.