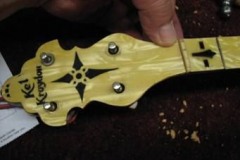 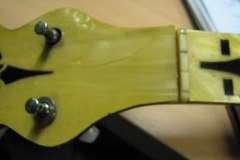 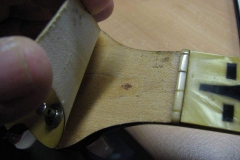 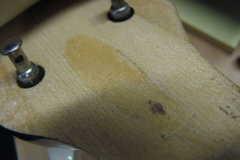 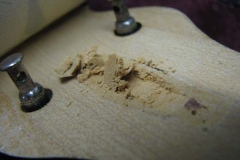 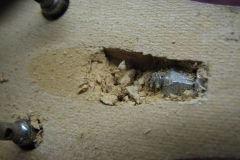 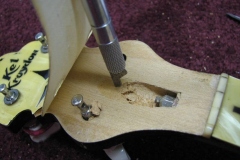 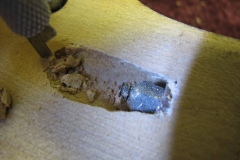 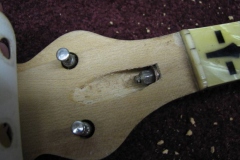 Students of prewar Gibson banjos know that the adjustable truss rod was found only in Gibson-brand instruments, and not on budget models produced by Gibson under other brand names such as Kalamazoo, Kel Kroydon, Recording King, Studio King, S.S. Stewart, and Truett. . . right?  As is so often the case with prewar Gibson banjos, the real answer is. . . “well, sort of.”

It apparently made more sense from a manufacturing standpoint for all Gibson-made banjo necks to be equipped with an adjustable truss rod; the difference was that on the budget models, there was no cavity at the peghead for access to the rod!  The photographs above were sent in by Gibson banjo scholar Frank Schoepf; lifting up the pearloid peghead overlay on this KK-10 tenor banjo neck revealed a truss rod cavity filled with wood putty.  Careful removal of the putty revealed a perfectly functioning truss rod that had been hidden away in this neck for about eighty years.