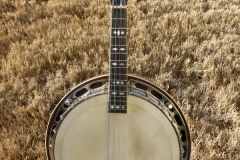 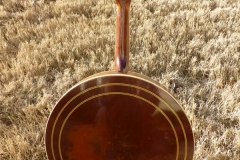 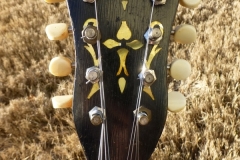 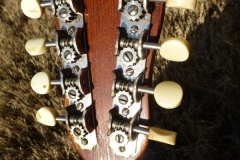 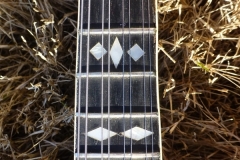 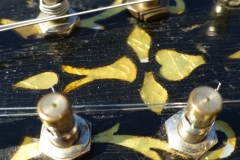 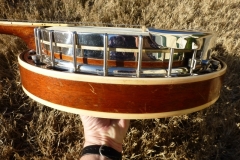 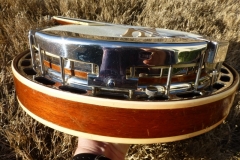 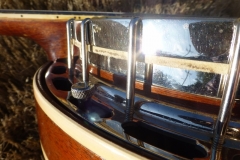 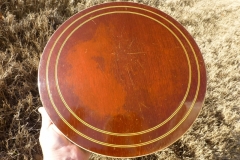 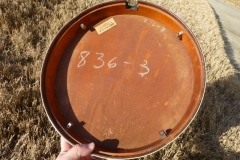 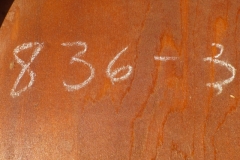 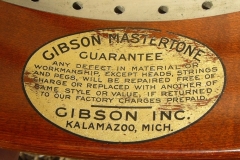 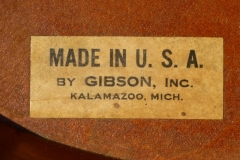 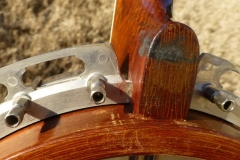 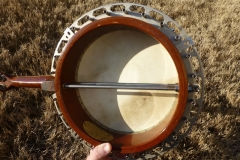 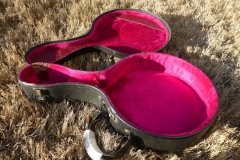 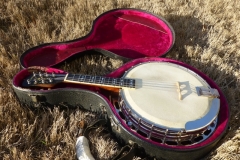 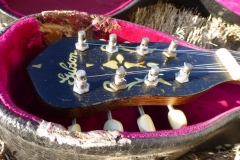 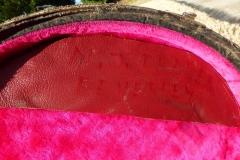 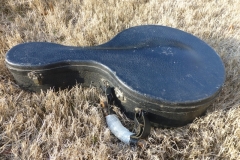 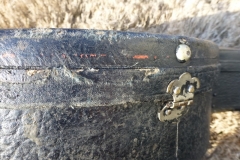 The factory order number of this MB-3 dates to 1938 (see Gibson banjo serial numbers vs. factory order numbers), by which time the style 3 designation had been discontinued in favor of style 75 for banjos in tenor, plectrum, or five-string configurations.  #836-3 features the same pot construction found on style 75 Mastertone tenor banjos of the period, with a one-piece flange, forty-hole raised-head tone ring, and mahogany resonator with two concentric circles of white/black/white purfling.  The tailpiece is the Grover “window” or “first model” type rather than the Presto typically seen on style 75 banjos, since a Presto would not have enough string attachments to accommodate the eight strings of a mandolin-banjo.  The mandolin neck has fifteen frets; the peghead features the “leaves and bows” inlay pattern seen on style 75 banjos, while the ebony fingerboard is inlaid with the “diamonds and squares” pattern which had been standard on style 3 Mastertones of the 1920s.  The case is a plush-lined, “red-line”  #393 by Geib.

#836-3 is listed in Gibson’s factory ledgers as part of a large shipment to Nicholson, Ltd., a Gibson dealer in Australia; this shipment was originally intended to be made on November 15, 1939, but a note in the ledger indicates that the shipment was held due to an unspecified “embargo” and was not actually sent out until November 17.  Typical of export instruments, there is a “Made in U.S.A.” label inside the resonator and a “Made in the U.S.A.” stamp on the back of the peghead.  A piece of vinyl glued inside the case lid is marked with the name of a previous owner, M.J. Draper, and his home town of Beverley, which could refer either to the town of that name in the “Wheatbelt” region of Western Australia or to a suburb of Adelaide.