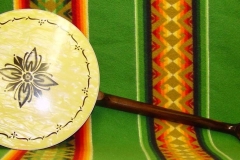 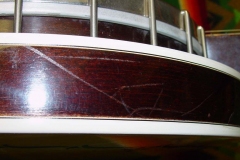 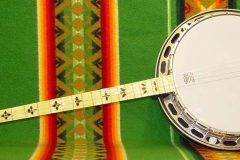 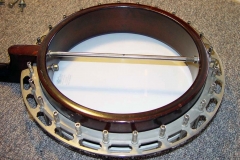 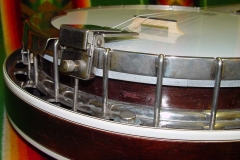 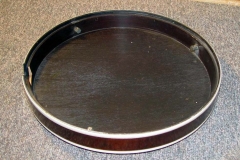 In the 1930s, Gibson made a number of banjos for sale by other companies, including mail-order houses such as Montgomery Ward.  These banjos were labeled with a variety of brand names (sometimes no brand name), and normally bore no Gibson markings even though they were made at the Kalamazoo factory and in many cases were very similar to Gibson catalog models.

According to Gibson historian Joe Spann, Montgomery Ward offered the model #701 tenor banjo only in 1930-1931.  The neck and resonator are made of dark-finished straight-grain maple as used on the Gibson style 1 of the time, although the resonator features multi-ply binding rather than the single white binding of style 1.  The pearloid veneers on the back of the resonator and on the peghead overlay and fingerboard are decorated with the stenciled floral motif as used on the Gibson style 11, but all in black as opposed to the multi-color designs seen on style 11.  The full-thickness maple rim and one-piece flange are the same as used on Mastertone models of the period but, consistent with Gibson-brand non-Mastertone models, there is a small-diameter brass hoop on top of the rim rather than a true tone ring. There is no logo on the peghead.

This example remains in excellent original condition with the exception of a replaced tailpiece.