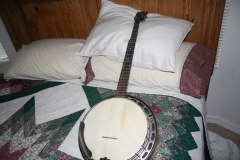 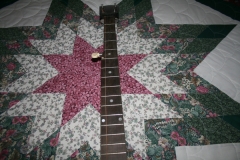 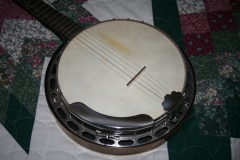 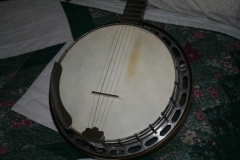 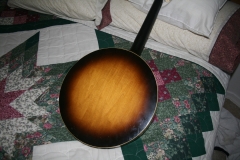 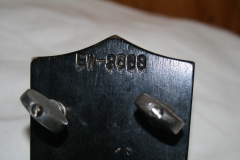 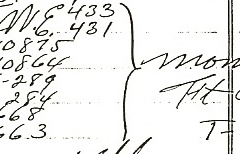 In the 1930s, Gibson made a number of banjos for sale by other companies, including mail-order houses such as Montgomery Ward.  These banjos were labeled with a variety of brand names (sometimes no brand name), and normally bore no Gibson markings even though they were made at the Kalamazoo factory and in many cases were very similar to Gibson catalog models.

According to Gibson historian Joe Spann, Montgomery Ward offered the model #955 five-string banjo only in 1939-1940.  The pot is very similar to the Gibson style 00 of the time; the neck and peghead shape are the same type used on Gibson’s in-house Kalamazoo budget brand, although without any peghead logo.

This example bears a true serial number, rather than a factory order number, stamped on the back of the peghead.  The letter prefix “E” indicates a production date of 1939 while the “W” identifies the instrument as a model made for Montgomery Ward.  #EW-2668 was shipped to Montgomery Ward in Fort Worth, Texas on February 5, 1940.