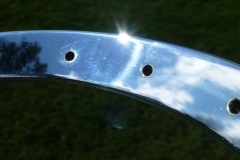 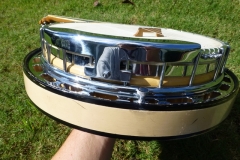 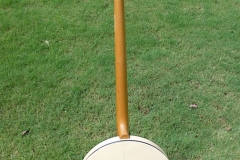 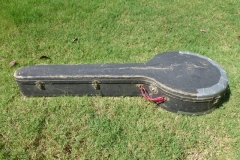 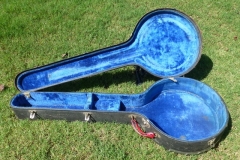 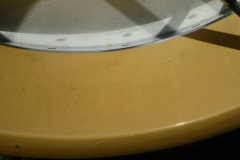 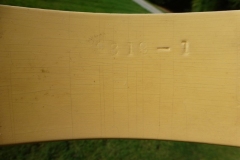 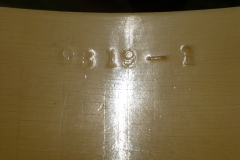 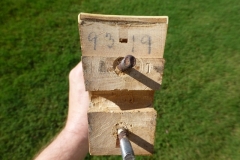 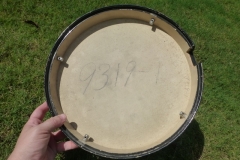 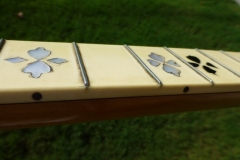 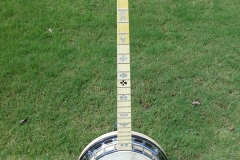 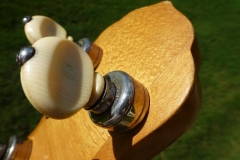 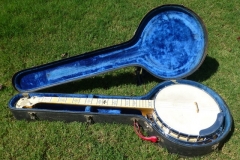 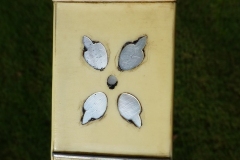 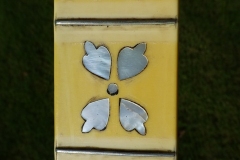 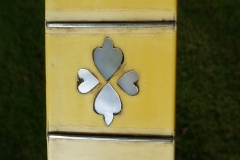 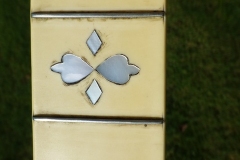 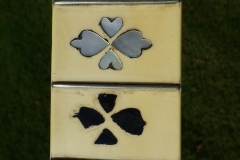 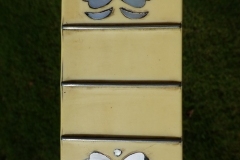 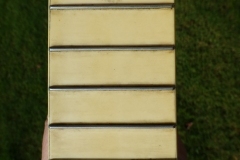 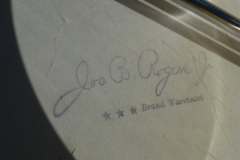 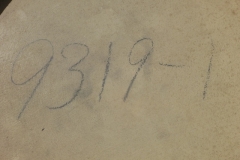 This plectrum Mastertone dates to 1929 (see Gibson banjo serial numbers vs. factory order numbers) and is one of the most unusual banjos ever produced by Gibson.  With no Gibson peghead logo and an array of features unlike any other Gibson banjo ever seen, it is possible that this instrument was built by an employee for his personal use.

#9319-1 features tube-and-plate rim construction with chrome-plated hardware.  The rim and resonator are finished with the opaque cream color known as “white holly” finish when seen on Florentine and Bella Voce models, while the neck is natural-finished, straight-grain maple.  The peghead overlay and fingerboard are ivoroid; the rhinestone peghead ornamentation is reminiscent of that seen on the Florentine, although a large “M” takes the place of the Gibson logo and an unusually high placement of the truss-rod cavity has caused the lower part of the “ice cream cone” rhinestone array to be omitted.  The fingerboard is inlaid with the hearts and flowers pattern in a version most closely resembling that seen on the Royal P-T; an inlay at the ninth fret, typical of guitar position markers rather than the banjo’s customary placement of an inlay at the tenth fret, indicates that the original owner of this banjo was likely a guitar player.  A subsequent owner painted on a position marker at the tenth fret.  The scale length is unusually long at 27 inches and the neck profile is quite deep, measuring 1 1/16″ from front to back at the twelfth fret.

One of this banjo’s most unusual features is the tailpiece, or lack thereof; instead of a separate tailpiece as seen on all Gibson banjos, this example has four holes drilled into the side of the tension hoop at the tailpiece position, with screw-in string attachments as seen on a Kershner-type tailpiece.  While highly unusual, this appears to be original to the banjo, as the top edge of the tension hoop at that location was filed off and rounded prior to plating to avoid having a sharp edge cutting into the strings.

The tone ring is a high-profile flathead weighing one pound, fourteen ounces.  This version of the flathead tone ring was usually seen in a gold-plated, engraved version in Gibson’s Royal P-T model; its presence here in a chrome-plated version with no engraving is extremely rare and possibly unique.  The Mastertone decal is uncut.  A prior owner’s name, “Richard H. Cole”, is written on the Rogers calfskin head; no information about Mr. Cole has been found to date.  The banjo remains in its original plush-lined hardshell case.