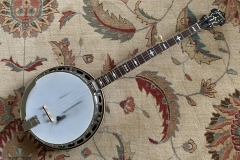 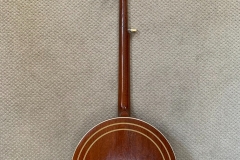 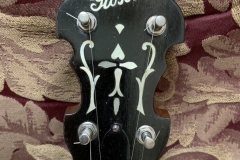 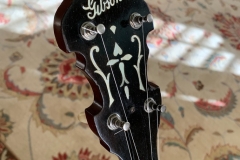 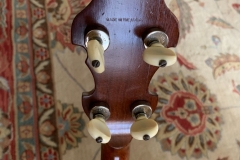 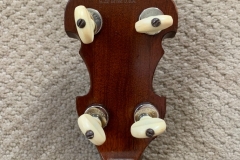 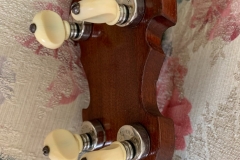 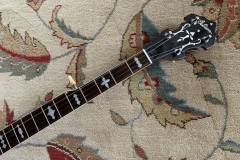 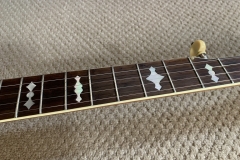 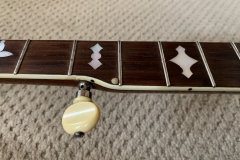 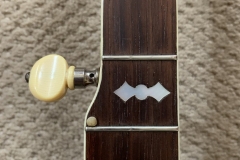 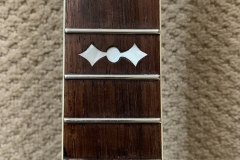 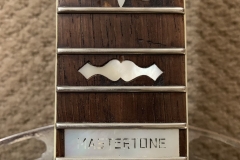 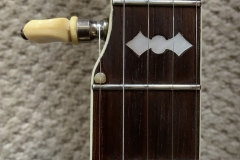 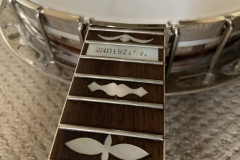 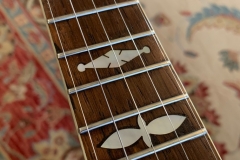 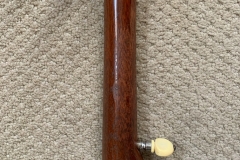 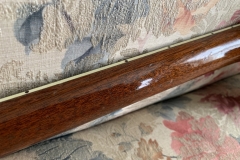 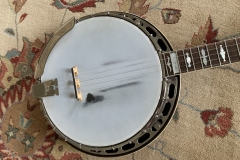 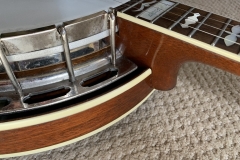 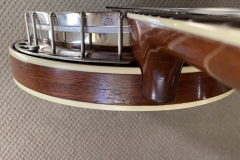 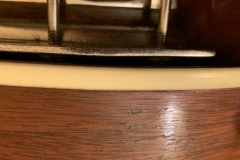 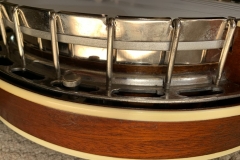 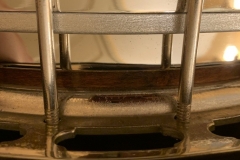 The 1930s style 3 Mastertone with one-piece-flange and flathead tone ring is an iconic banjo among bluegrass players, being associated with such legendary players as Rudy Lyle and J.D. Crowe.  #9602-12 (see Gibson banjo serial numbers vs. factory order numbers) is one of the especially coveted original five-string examples of the model.  It conforms to standard specifications for the model with mahogany neck and resonator, two concentric rings of white-black-white purfling on the back of the resonator, nickel-plated hardware, double-cut peghead, and the leaves and bows inlay pattern.

This banjo is discreetly marked inside the resonator neck notch with the name of the original owner, “D. Sinclair” and the date October 1930, which corresponds to the revised prewar Gibson banjo chronology established by researcher Joe Spann.

Here are a few details from the late William B. Anderson, pictured above, who acquired the D. Sinclair RB-3 when it was sold out of the family of its original owner:

“I purchased this banjo in May of 1985 from George Gruhn and Calvin Minner of Gruhn Guitars in Nashville, Tennessee.  I could not sleep the night before my trip to get the banjo so I left Little Rock about 1:00 a.m., arriving at Gruhn’s and sleeping a couple of hours in front of the store until he opened.  Calvin, a banjo-picking friend of mine that I had first met in Mountain View while competing in the National Grandpa Jones Banjo Contest, called one day to offer me the first chance to buy this instrument.  This was a very special day.  To acquire a prewar Gibson flathead banjo was a lifelong dream of mine.  The banjo came complete with its original bridge, bracket wrench, armrest mute, and truss rod instructions, in its red-line hard shell case.  Around 1990 at my request, Marty Lanham of Nashville, Tennessee replaced the original frets with guitar frets and the friction fifth-string peg with a geared peg.  The original frets and fifth peg are saved along with the armrest mute, which was uncomfortable.  This instrument has been played by J.D. Crowe, Bobby Rodgers, Russell Sparks, Scott Vestal, Robby Boone, Sonny Osborne, and Bobby Hicks, to mention a few.  I have played this banjo all around the Arkansas area, both performing and recording with various bands: David Leatherman and Stone County, New Stone County, Timber Creek, The Old School Bluegrass Band, Josh Love Band, radio and television commercials, etc.”

Here is some more information from its current owner, David McLaughlin:

“Upon Bill Anderson’s passing on January 17, 2021, the D. Sinclair RB-3 #9602-12 was passed on to me by Bill’s family.  I have known about this banjo since Bill acquired it in 1985.  I’ll never forget how excited he was.  And I was just as excited as he was at the time.  Since I have now become the steward of the D. Sinclair RB-3, I have begun some deep research on its history, and here is what I know as fact so far, as told to me by several people who personally remember this banjo when it was brought into a music store in the early 1970s.  The granddaughter of its original owner, D. Sinclair, inherited the banjo.  In 1973 she brought it in to a shop in Victoria, British Columbia then called The Folklore Centre, owned by Dave Cahill.  The Folklore Centre, which later became Old Town Strings, was a music teaching studio, repair shop, and dealer of instruments.  She didn’t bring it in to sell and it was not for sale at all, but instead she wanted to take lessons.  Dave Cahill became her banjo instructor, and gave her lessons for a few years.  Finally, in 1985 she decided it was time to sell the banjo.  So through another dealer in Victoria by the name of J. Clark, it was flipped to George Gruhn, where it immediately sold to Bill Anderson in May of 1985.  Bill died on January 17, 2021 and the banjo came to me from his family.  The things I have done to the banjo are as follows:  I removed the railroad spikes that had been installed under the fifth string.  I reinstalled the original fifth-string tuner, which works perfectly.  I am keeping the larger frets installed in 1990 by Marty Lanham in place because they are SO good!  I have put a Bill Callaham bridge on the banjo.  I have replaced the original mute armrest with a very clean 1930s standard armrest.  Also, the back of the resonator has some significant buckle rash that somebody had shellacked over many years ago.  Fortunately, it was a soluble coating, which I was very easily able to remove entirely without affecting the original finish or the wood.  So now there is nothing but the original finish on the entire banjo, which is all in exceptionally fine original condition, except for the buckle rash on the back, and light normal playing wear on the back of the neck between the peghead and fifth fret.  The originality, sound, and playability of this banjo are nothing short of spectacular.  And there are absolutely no issues of concern in any way.  Of over thirty RB (original five-string) flatheads I have played (plus numerous PB and TB flatheads), I put this one in the top 10% in originality AND in sound.  In 2013, in an ongoing conversation by email about every topic of our lives, at one point Bill Anderson and I were discussing RB-3 #9602-12, among many other things.  Though Bill was not playing it out as much any more, he was still just as excited about the time he acquired it.  Bill would not mind me sharing the following words from that conversation: ‘David, George sold it to me 100% original but for the skin head and strings for $8500.  It even has Gibson papers, original bridge, and bracket wrench.  I bought it over the phone before it even arrived in Nashville.  The tuners in the peghead have never been off; no D-tuners were ever on it.  I made a few reversible alterations:  Marty Lanham installed a geared fifth peg but saved the original.  I had it refretted by Marty but we saved the originals.  I changed the armrest but saved the original (the original has a mute operation button).  I removed the factory mute assembly but saved it.  I still have the original red-line case.  The tone is great, very balanced.  As George would say, “It is what it is.”  My favorite purchase ever. . . Bill.'”