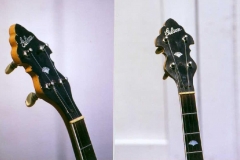 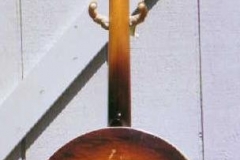 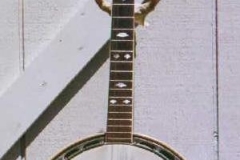 In the 1930s, Gibson made a number of banjos for sale by other companies, including mail-order houses such as Montgomery Ward.  These banjos were labeled with a variety of brand names and normally bore no Gibson markings even though they were made at the Kalamazoo factory and in many cases were very similar to Gibson catalog models.  This banjo, manufactured under the Recording King brand, is a rare original five-string.  It features nickel-plated hardware with a sunburst-finished maple resonator similar to that found on the Granada and style 6.  The flange is one-piece.  The banjo is currently set up with a Vintage Flathead tone ring by Steve Huber.

This banjo’s original five-string neck features the typical Recording King peghead shape, but is highly unusual in that it bears a Gibson logo.  It is possible that the overlay was professionally replaced some time ago; if this overlay is original, it is quite rare.