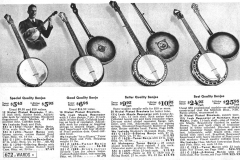 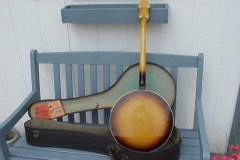 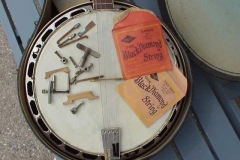 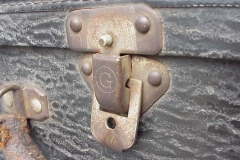 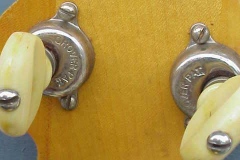 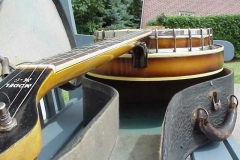 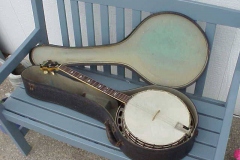 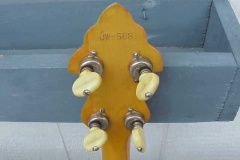 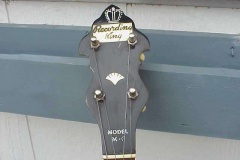 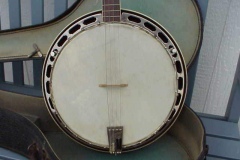 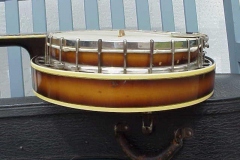 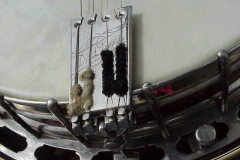 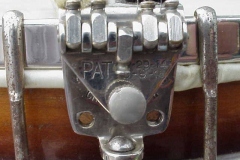 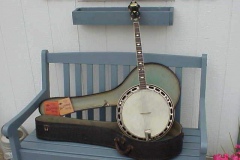 In the 1930s, Gibson made a number of banjos for sale by other companies, including mail-order houses such as Montgomery Ward.  These banjos were labeled with a variety of brand names and bore no Gibson markings even though they were made at the Kalamazoo factory and in many cases were very similar to Gibson catalog models.  This banjo carries the Recording King logo, the brand most commonly seen on banjos made by Gibson for Montgomery Ward.  While the model designation “M-6” is stenciled on the peghead, this banjo was referred to both in Gibson’s factory shipping ledgers and in Montgomery Ward catalogs as model #1593; it was offered in Montgomery Ward’s Spring/Summer 1939 and Fall/Winter 1939-1940 catalogs.

The peghead shape is the same as that used on Gibson’s style 11 banjos and on the budget-model banjos made by Gibson under the Kel Kroydon brand name.  The model designation is stenciled on the peghead just above the nut, where the truss rod cover would be located on a Gibson-brand banjo; an adjustable truss rod was available only on “real” Gibsons.  The resonator, as is typical for Recording Kings, is somewhat deeper than the ones found on Gibson-brand banjos.  The sunburst finish on the back and sides of the resonator is reminiscent of the stain used on Gibson’s style 00 banjos, but the binding here is multi-ply and there is a moderate amount of flame on the resonator back.

The pot construction is essentially the same as that found on Gibson-brand style 00 banjos, with a rim measuring only 1/2″ thick below the flange and a thin tension hoop fitted with flat hooks, but the same one-piece pot metal flange found on Gibson’s more expensive Mastertone models.

The tailpiece is a Kerschner engraved with the word “DeLuxe”; this tailpiece would normally be found on style 5 banjos of the late 1920s, although it would have been gold-plated rather than the nickel version seen here.

The peghead and rosewood fingerboard are inlaid with the fan design common to Recording King banjos.  The serial number is stamped on the back of the peghead; the “D” indicates the year 1938, and the “W” stands for “Ward”.  #DW-668 was shipped to Montgomery Ward (location unspecified) on October 10, 1938.