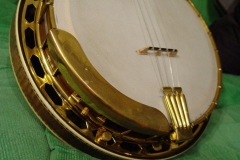 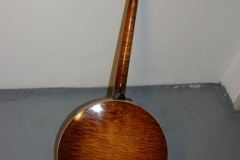 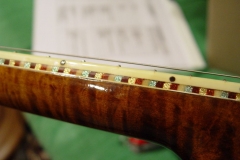 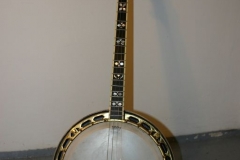 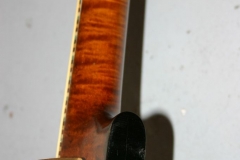 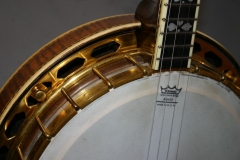 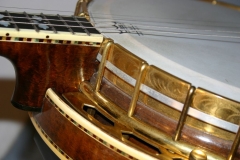 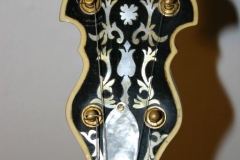 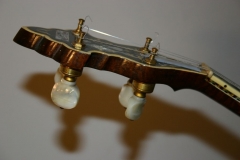 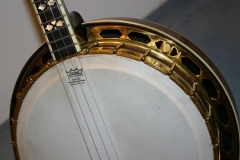 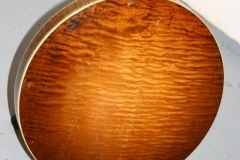 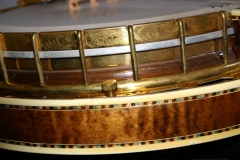 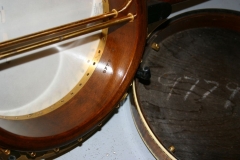 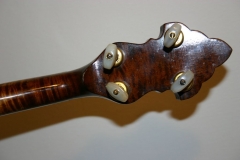 In the 1930s, Gibson made a number of banjos for sale by other companies, including mail-order houses such as Montgomery Ward.  These banjos were labeled with a variety of brand names and bore no Gibson markings even though they were made at the Kalamazoo factory and in many cases were very similar to Gibson catalog models.  Gibson manufactured a number of different banjo models for Montgomery Ward under the Recording King brand, many of them lower-priced instruments.  A few, however, such as this example, were of extremely high grade and were comparable to banjos high in the Gibson-brand Mastertone line.  There was frequent turnover in the line of banjo models offered by Montgomery Ward; the instrument seen here advertised as a model #507 in the company’s fall/winter catalog of 1930-1931.

#9779-1 features curly maple reminiscent of a Granada of the period, a two-piece flange with hexagonal openings, gold-plated and engraved hardware, and a forty-hole archtop tone ring.  The resonator binding is a multicolored type sometimes found on Gibson’s ornate Bella Voce and Florentine models; the inlay is the same pattern used on Gibson’s style 6 Mastertone, and the tailpiece is a Grover “clamshell” as used on Gibson styles 4 and up during this period.