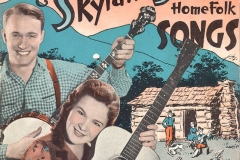 The cover of this 1937 Lulu Belle and Scotty songbook shows Scotty Wiseman with his five-string flathead Granada, which has long been believed to be the one now owned by Sonny Osborne.  New research into Gibson’s prewar shipping records, however, show that Wiseman’s Granada was a different banjo and its current whereabouts are unknown.  Lulu Belle is sporting a very nice Martin 000-18 (or possibly OM-18).