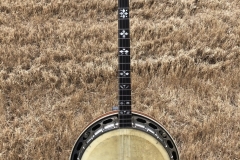 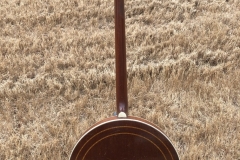 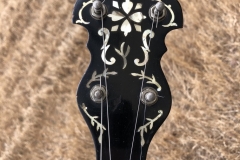 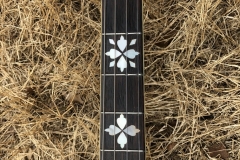 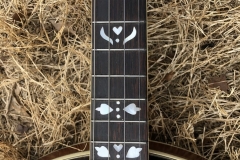 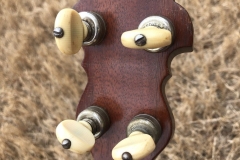 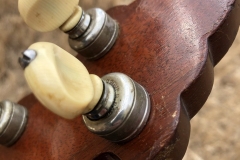 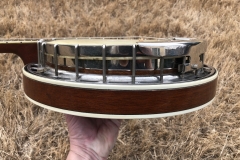 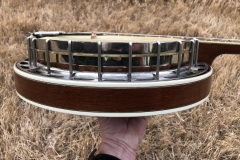 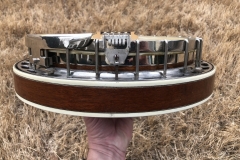 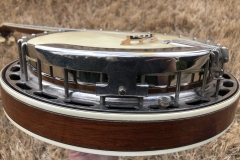 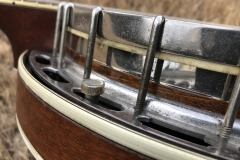 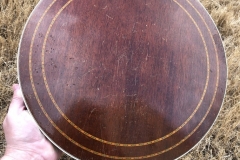 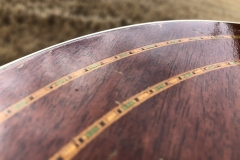 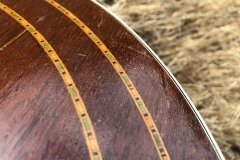 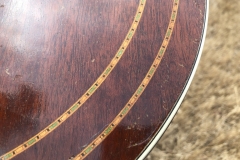 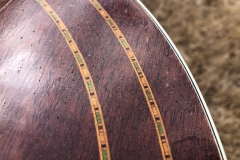 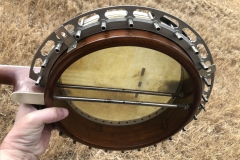 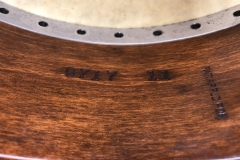 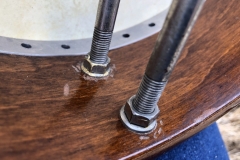 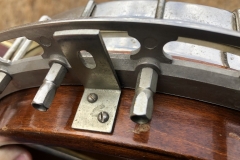 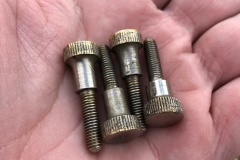 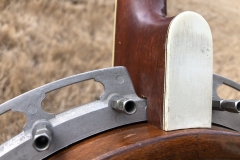 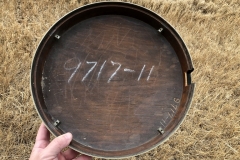 In the 1930s, Gibson made a number of banjos for sale by other companies, including mail-order houses such as Montgomery Ward.  Banjos made by Gibson for Montgomery Ward have been seen under the brand names Recording King and Studio King; the Studio King brand seems to have been produced in smaller numbers and to have been reserved for higher-end banjos comparable to the Gibson-brand Mastertone line.

If it were a Gibson Mastertone, it’s hard to say where this Studio King tenor would fall within the line. Like a style 3 of the period, it features mahogany wood and nickel-plated hardware, but its hearts and flowers inlay pattern is considerably fancier than the leaves and bows pattern normally seen on style 3 banjos.  Whereas the style 3 of the 1930s featured white-black-white concentric rings inlaid in the back of the resonator, this Studio King has multicolored wood parquetry left over from the top-of-the-line style 5 of the 1920s.  The multi-ply binding on the neck and resonator is of the type used on the gold-plated, engraved Granada of the 1930s, while the white heel cap is a feature seen on style 4 banjos of the 1920s.  The peghead shape is the same as that seen on style 11 banjos as well as those manfuactured under the Kel Kroydon brand name.  The flange is one-piece and the tone ring is a forty-hole raised head as seen on Mastertones of the period; the tuners are Grover “two-bands”.

#9717-11 remains in fully original condition with the exception of a missing tailpiece cover and one replacement prewar resonator thumb screw; it is currently housed in a 1930s “red-line” #511 case by Geib and Schaefer.

The longtime owner of #9717-11 was Peter Miccio, Sr. (December 24, 1923–December 20, 2010) of upstate New York. Mr. Miccio’s son believes he acquired the banjo circa 1935 and tells us that “his high school band teacher wanted him to join the band but the banjo wasn’t part of the equation! So he made my father play the viola because of the identical tunings.” Mr. Miccio joined the Army and was stationed in North Africa and Italy for four years; according to Mr. Miccio’s son, his father “played mostly Italian standards. . . as soon as I mastered my C and G chords on my guitar we were all set. Every family get-together, birthday, anniversary, he’d say ‘bring your guitar!’ Lots of great memories.”