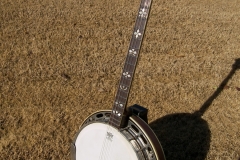 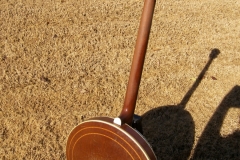 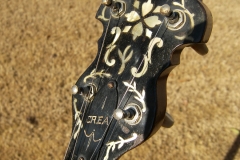 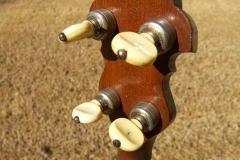 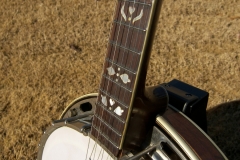 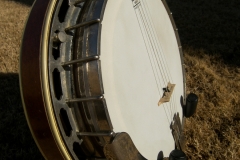 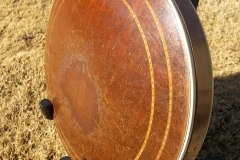 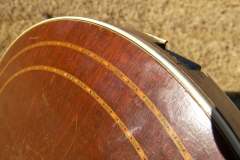 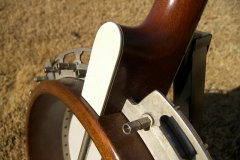 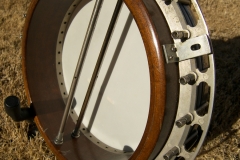 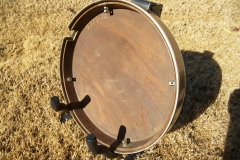 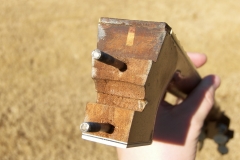 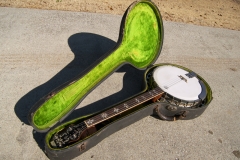 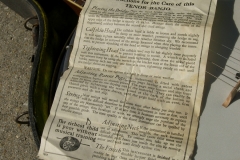 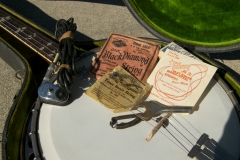 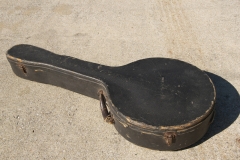 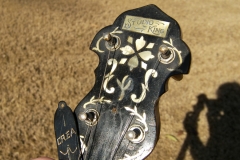 In the 1930s, Gibson made a number of banjos for sale by other companies, including mail-order houses such as Montgomery Ward.  Banjos made by Gibson for Montgomery Ward have been seen under the brand names Recording King and Studio King; the Studio King brand seems to have been produced in smaller numbers and to have been reserved for higher-end banjos comparable to the Gibson-brand Mastertone line.

If it were a Gibson Mastertone, this Studio King tenor would fall somewhere between style 3 and style 4.  Like a style 3 of the period, it features mahogany wood and nickel-plated hardware, but its hearts and flowers inlay pattern is considerably fancier than the leaves and bows pattern normally seen on style 3 banjos.  Whereas the style 3 of the 1930s featured white-black-white concentric rings inlaid in the back of the resonator, this Studio King has multicolored wood marquetry somewhat reminiscent of that seen on style 4 banjos on the period.  The multi-ply binding on the neck and resonator is of the type used on the gold-plated, engraved Granada of the 1930s.  The peghead shape on this example is unusual, with its upper portion having an outline similar to a Gibson fiddle-shaped peghead rather than the long, tapered point normally seen on Recording King and Studio King pegheads.  The flange is one-piece and the tone ring is a forty-hole raised head as seen on Mastertones of the period; the tuners are Grover “two-bands”.

#9717-12 bears a truss-rod cover with the factory-inscribed personalization “CREA”, the significance of which is unknown.  This customization is in fact the only reason for the truss-rod cover’s presence on this banjo since, like other non-Gibson-brand banjos, it has no adjustable truss rod.  The banjo is accompanied by its original hardshell case and accessories, including a sheet of maintenance instructions similar to, but different from, the one sent out with Gibson-brand banjos.

The original owner of this exceptionally good-sounding tenor banjo was a Mr. Heaton who lived near the small community of Moonshine, Illinois.