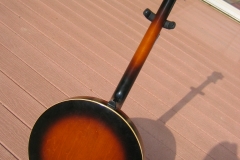 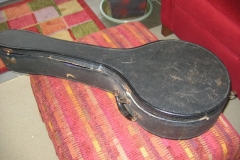 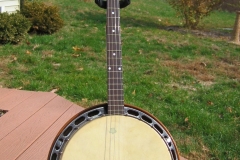 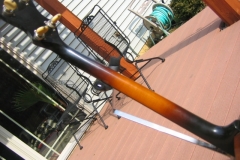 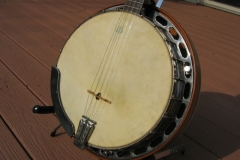 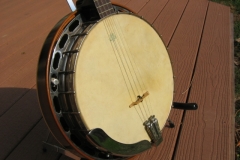 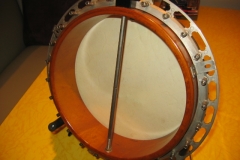 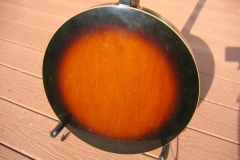 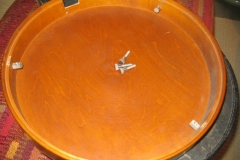 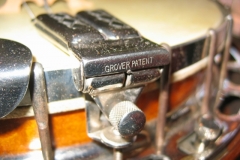 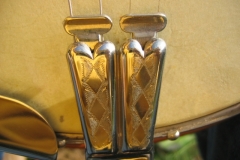 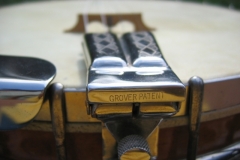 “A genuine Gibson tenor banjo for only $30.00”, said the 1937 Gibson catalog of style 00. Introduced circa 1935 and in production through the early 1940s, it was the least expensive banjo Gibson manufactured in the prewar period.

This banjo conforms for the most part to standard catalog specifications for style 00, with maple neck and resonator, sunburst finish on the neck and back and sides of the resonator, binding on the back edge of the resonator only, nickel-plated hardware, one-piece pot metal flange, dot inlays in an unbound Brazilian rosewood fingerboard, and two-tab Grover tuners.  The peghead shape is unique to style 00, and the Gibson logo is silkscreened in white rather than being inlaid in mother of pearl.  The rim is 1/2″ thick below the flange, as is the case with most style 00 banjos, and there is no tone ring or brass hoop but only a bead turned in the top of the rim to serve as a bearing for the head.

Style 00 banjos normally featured an inexpensive tailpiece referred to in Gibson catalogs as the “Grover first model”; this example is unusual in that the tailpiece is a much fancier Grover “two-hump” clamshell with decorative engraving.