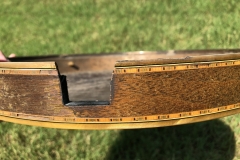 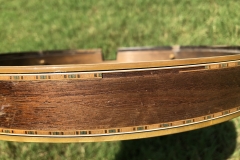 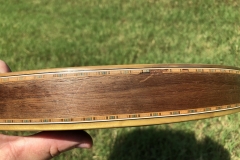 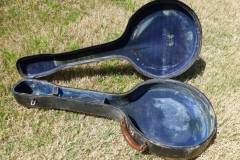 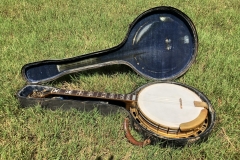 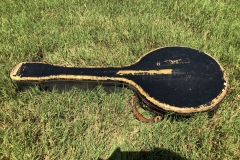 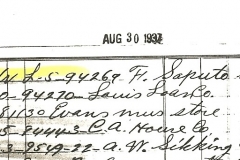 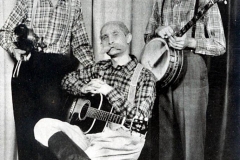 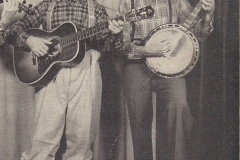 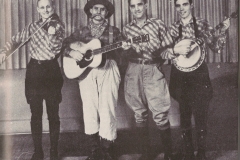 Few people can claim to have played banjo for Grandpa Jones, but Jones’ first instrument was actually guitar and early in his career he employed a tenor banjo player in his band; Loren “Biff” Bledsoe, born circa 1915 in Jasonville, Indiana, performed with Jones as one of his “grandsons”, along with fiddler Pete Rentschler, during Jones’ tenure at radio station WMMN in Fairmont, West Virginia circa 1939-1940.   Bledsoe is seen above in photos from the period playing a 1920s style 5 Mastertone tenor banjo with a 1930s “flying eagle” fingerboard inlay pattern; Gibson’s prewar shipping ledgers record TB-5 #8444-5 (see Gibson banjo serial numbers vs. factory order numbers), dating to 1926, being repaired and returned on August 30, 1937 to the C.A. House Music Company, which researcher Joe Spann has determined had a location in Fairmont, West Virginia.  A comparison of #8444-3 to the period photographs of Biff Bledsoe makes it almost certain that this is his banjo.

The Gibson factory routinely replaced entire fingerboards on instruments returned for fret work and typically used a then-current inlay pattern rather than trying to match the original; by the time Biff Bledsoe returned his banjo to the factory in 1937, style 5 had been out of production for nearly ten years and the last remaining sets of wreath inlays had been used on a small number of style 3 Mastertones in the early 1930s.  Flying eagle inlays had been used on the style 4 and Granada, both of which had just been discontinued in the summer of 1937, making this fingerboard a logical choice for installation on #8444-3.  Bledsoe obviously put many more hours of playing time on this TB-5 after its fingerboard replacement, evident by the considerable fret wear on the instrument today.  A combination of heavy use by Bledsoe and likely neglect by a later owner or owners helps to account for the banjo’s current condition including heavy finish wear on the resonator, replaced tension hooks and nuts, missing resonator screws, some lost marquetry and, strangely, a missing coordinator rod.  It is not known how long Biff Bledsoe owned #8444-3, but the banjo was bought by its last owner in Texas in the mid-1960s.

Thanks to Terry McGill for helping to piece together the history of this banjo.