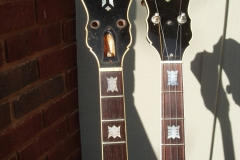 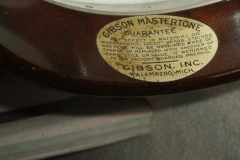 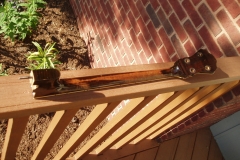 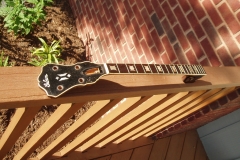 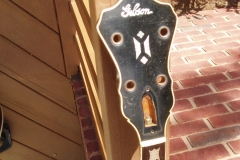 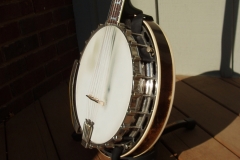 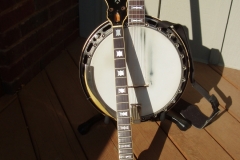 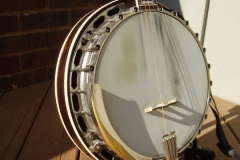 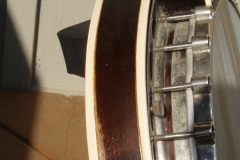 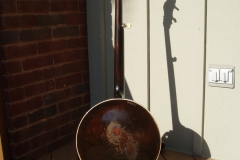 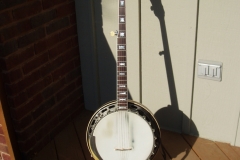 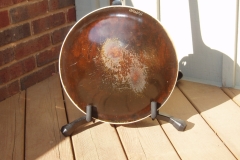 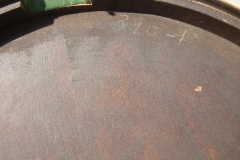 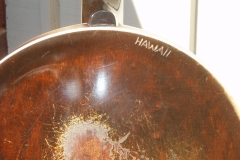 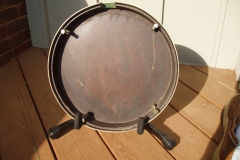 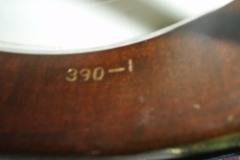 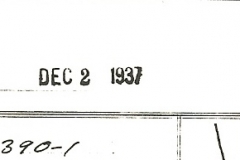 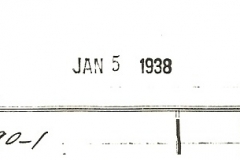 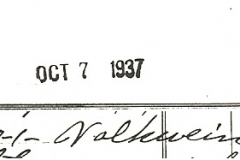 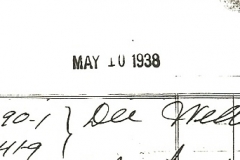 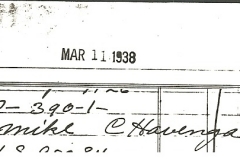 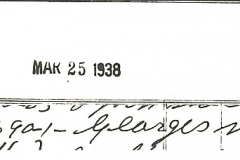 Introduced as part of Gibson’s overhaul of its Mastertone line in 1937, style 7 was the least expensive of the three new top-tension models.  #390-1 is from the second known lot of TB-7s to have been produced; it conforms to standard catalog specifications for the model with dark-finished maple, nickel-plated hardware, and “slashed bowtie” inlays in a radiused rosewood fingerboard.  The banjo’s original owner is said to have been a serviceman station in Pearl Harbor at the time of the Japanese attack in 1941; this unidentified original owner is also believed to be responsible for the word “Hawaii” carved into the back of the resonator.

The shipping history of #390-1 paints a picture of the lukewarm reception Gibson’s new line of banjos received.  As one of the first top-tension banjos to be built, this example was shipped on October 7, 1937 to Volkwein Brothers Music in Pittsburgh, Pennsylvania; Volkwein Brothers did not sell the banjo and it was returned to the factory in Kalamazoo, where it was taken out as a sample on December 2, 1937 by salesman “Lanky” Neal.  The banjo left the factory again on January 5, 1938 when it was taken out as a sample by salesman Clarence Havenga; Havenga took the banjo out again on March 11, 1938, but it still remained unsold.  The banjo was shipped to George’s Music (possibly located in Schenectady, New York) on March 25, 1938 and once more returned to Kalamazoo before being shipped a final time on May 10, 1938 to Gibson teacher-agent Dee Wells of Louisville, Kentucky.

The factory order number is stamped inside the rim in an unusual sans-serif font seen only in a few scattered banjo lots in the 1930s.  #390-1 (see Gibson banjo serial numbers vs. factory order numbers) is currently set up with a reproduction five-string neck by Frank Neat.

These sound samples provide an illustration of the tone, power, and volume produced by this original top-tension Mastertone banjo: