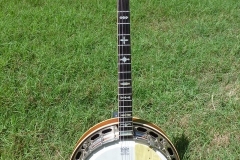 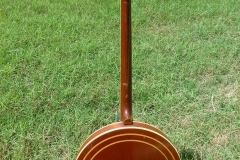 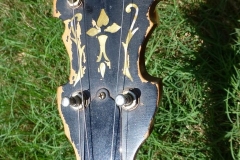 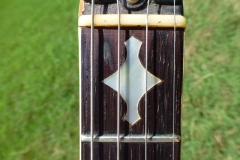 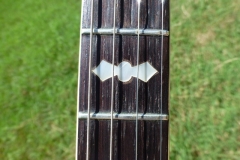 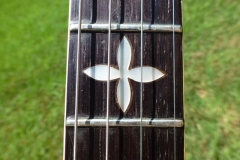 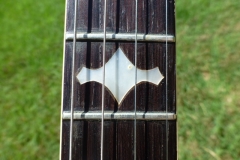 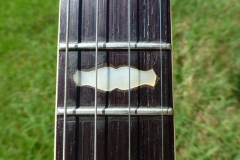 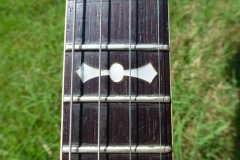 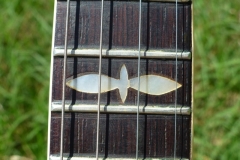 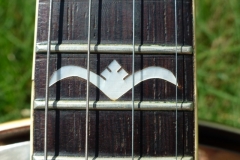 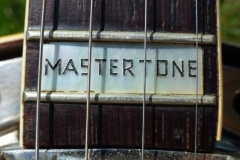 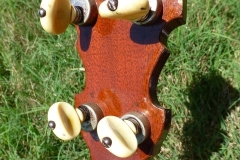 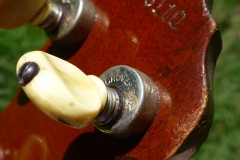 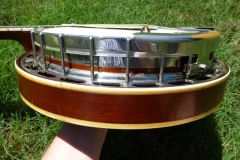 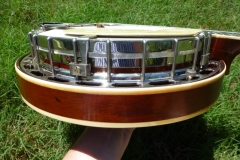 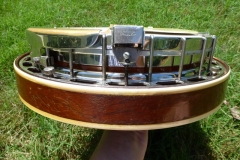 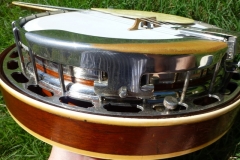 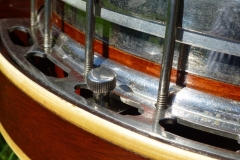 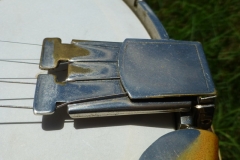 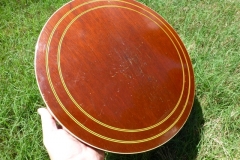 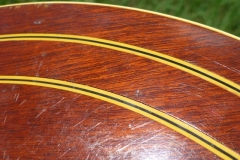 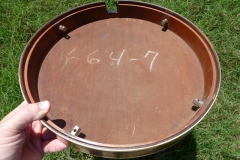 1 2 ►
1937 was a year of great change in Gibson’s banjo line; Mastertone models 4, 6, Granada, Florentine, and All American were discontinued and replaced with the new top–tension styles 7, 12, and 18.   Of the previous Mastertone models, only style 3 survived; its price was lowered from $100 to $75 and, in keeping with Gibson’s new fashion for naming instruments after their prices, was renamed style 75.

#664-7 remains in excellent original condition with mahogany neck and resonator, nickel-plated hardware, forty-hole raised-head tone ring, and a variation of the “leaves and bows” inlay pattern with the first-fret inlay turned ninety degrees from its typical orientation.  The banjo retains its original #401-N factory head guard and is housed in its original #509 plush-lined case by Geib, Inc. which has been embellished with two large bald eagle decals.  The original Grover “pancake” tuners were installed on the 1939 replacement neck; close examination reveals that the Gibson factory plugged the eight small screw holes in the back of the peghead which had previously been drilled for installation of the then-current “two-tab” Kluson tuners.  There is an old crack in the resonator sidewall and a repaired break at the neck heel.

The longtime owner of #664-7 was Richard Harter of Lebanon, Pennsylvania, who is said to have bought the banjo in a pawn shop.  The lid of the banjo case bears a gash which, according to family lore, was caused by Mr. Harter’s axe-wielding wife when he returned home late one night after an evening of playing the banjo in a local “joint”.  The banjo remaied in Mr. Harter’s family until February 2017.